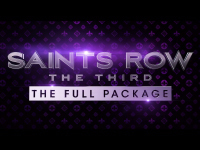 Saints Row: The Third — The Full Package is heading to the Nintendo Switch for those who need more Saints Row in their mobile life

It only took eight years, but it looks like Saints Row: The Third is making its way onto a Nintendo system. You most likely figured it out that said system would be the Switch as it would be a bit weird for Deep Silver to bring it to any of the others, but sometimes gamers do not think clearly. That does not change the fact that a Saints Row title will be coming to the Switch on May 10th and bringing all of the fun we know of the series and game in a mobile way. You know, because the console is something you can go mobile with and bring all of the raunchy humor along for the ride.

To go with this release of Saints Row: The Third, there is a new Deluxe Pack coming with the game that will house all kinds of different goodies when the game drops in. More or less it is a lot of artwork for the game but also some other great goodies like a game case sleeve to take you back to 2011 and a new screen cloth to make sure you can see the game in all of its glory. You will need it when you go couch co-op with Saints Row: The Third so nothing is obscured on the smaller screen and you can kill everyone you want to. It is the little things that matter here and it is what we seem to be getting out of it all.

Saints Row: The Third — The Full Package On Nintendo Switch

The Deluxe Pack contains an array of Saints Row inspired goodies including:

Saints Row: The Third — The Full Package is the definitive release of one of gaming’s most beloved entries, playable on a Nintendo system for the first time ever with new features for Switch.

* Two DLC packs — the Bloodsucker Pack and the Unlockable Pack, have been omitted for game balance and improvement based on feedback.

Are you ready for Saints Row: The Third to drop on the Switch or will this be the reason you finally get one? Were you hoping for a bit more on the goodies side of things besides a bunch of art and stickers or will it work nicely for you? Could this be building to a new version of the game to hit other platforms or will we just need to stick to what we have? Let everyone know what you are thinking and then feel free to discuss. For more on Saints Row, if there is more, be sure to keep checking back in here. We will do what we can to have it all for you.