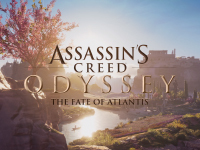 The DLC keeps rolling out for Assassin’s Creed Odyssey as the Fate of Atlantis bit is dropping next week for those who still hooked on the game. I know I am still in for the long haul of it all and will have choices to make when Ubisoft opens it up for all on April 23rd. A day filled with so much already and now the next big expansion to the Assassin’s Creed universe. Specifically the Underworld from what we are seeing here with more of the gods showing up and other mythical beasts in the middle of it all. By the gods, I do not know if I am fully ready for this new take on it all.

If, for some reason, you have not made it through the main game of Assassin’s Creed Odyssey, there is not much to worry about if you want to partake in this new DLC. You can either rush to hit level 28 in the game and complete the Between Two Worlds questline, the mythological main game story arc, and Heir of Memories, the Lost Tales of Greece questline or look toward the other option. That option being a shortcut that will place you in the DLC at level 52 with the basics that comes with so you can just enjoy the DLC. None of this will carry over to the main Assassin’s Creed Odyssey game when complete, but it is something for those who have not been able to hammer through until now.

Today, Ubisoft announced the release date for the episodes of the second post-launch story arc of Assassin’s Creed Odyssey, The Fate of Atlantis. The first episode, Fields of Elysium, will release on April 23rd across all available platforms. Throughout Fields of Elysium and the following two episodes, players will continue their Odyssey in the Greek afterlife to uncover the great mysteries that lie within the ancient realms of the gods.

As the story of Fields of Elysium unfolds, players will traverse the paradise of Elysium, a realm of great beauty, to reveal sinister secrets while facing against the might of the Isu. Players will encounter both new factions and familiar characters, and acquire new legendary weapons and gear.

Fields of Elysium will also introduce all-new Ability enhancements, which modify existing abilities to alter their function, giving players the opportunity to further fine-tune their playstyles. Ability enhancements are divided into each branch of the skill tree, Hunter, Warrior and Assassin, and several will be introduced in each episode, starting with Ares Bull Charge, Might of Artemis, Kronos Time Warp and Ares Madness in Fields of Elysium.

Following the first story arc, Legacy of the First Blade, The Fate of Atlantis will see our hero confront deities, encounter terrifying beasts of myth, and forge new bonds with a colorful cast of characters. After Fields of Elysium releases on April 23rd, the second episode, Torment of Hades, and the third episode, Judgment of Atlantis, will complete the second story arc mid-2019 on all available platforms.

The Assassin’s Creed Odyssey post-launch plan is the biggest and most ambitious in the franchise, and Season Pass owners will be able to access two major episodic storylines, Legacy of the First Blade and The Fate of Atlantis. Players can dive into new episodes as they premiere, or experience the epic adventures in their entirety once all episodes are available. The Season Pass also includes Assassin’s Creed III Remastered and Assassin’s Creed Liberation Remastered, which released for the PlayStation 4 computer entertainment system, the Xbox One family of devices including Xbox One X, and Windows PC on March 29th, 2019.

In order to play The Fate of Atlantis, players will have two different options:

Personally, I am excited to see what is in the works here for the Underworld in Assassin’s Creed Odyssey. It is always going to be a location I enjoy seeing through the eyes of many and am interested to see how all of the other beings are worked in. Also, just what they truly are in the universe of Assassin’s Creed. There have only been hints so far and there could be something drastically different when all is said and done. We will see it soon though…

Are you ready for this DLC in Assassin’s Creed Odyssey or will you be using that shortcut? How do you think all of this will play into the larger story of the franchise or will it be some kind of glitch in the system as we saw before? How basic do you think the shortcut will make you when compared to what you are already in the game? Let us and the world know down in the comments and then feel free to discuss. For more on Assassin’s Creed Odyssey news and the franchise in general, be sure to keep checking in here. We will stay on top of it all as best that we can.