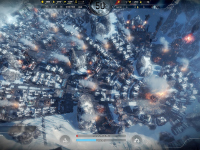 The official announcement on when Frostpunk will be coming to consoles is here with the word of Frostpunk: Console Edition

It has been a year, or so, since Frostpunk dropped out there for all of those PC gamers out there that wanted to get in on a society survival game in the vast colds. Obviously, this felt like it left a lot of gamers out but 11 Bit Studios wanted to make sure that PS4 and Xbox One gamers out there could have a chance to play the game. Not everyone has the ability to run games all that well with their PCs, so it makes sense to bring Frostpunk into some of the more standardized systems out there. That and keeping with the normal way video games go. At least if you can make it to this Summer.

Yes, Frostpunk is dropping this Summer for the console gamers out there to bring all of this post-apocalypse fun to more. There is no word on if it will hit the Switch at this point even if it looks like something that would work well there. We will just need to take what we can get and get excited to play Frostpunk off PC. Obviously, this means that all of the controls have been shifted and optimized for the controller and systems for visuals. Something that still looks amazing and makes plenty of sense to keep the game flowing in our minds and eyes.

Frostpunk: Console Edition — an unmatched society survival game with complex strategic gameplay coming to Xbox One and PlayStation 4 this Summer!

Frostpunk is a society survival game where heat means life and every decision comes at a price. Presenting complex strategic gameplay, demanding challenges and rich story, Frostpunk extends its unmatched survival experience to consoles. Adapted to the new platforms, with revised controls and adjusted mechanics — Frostpunk: Console Edition allows you to fully test your tactical prowess on the frozen wastelands.

Were you waiting for Frostpunk to finally come to the consoles or have you been enjoying the game since last year? Do you think that it will look just as good on the PS4 and Xbox One as it does on the PC? Do you think it will ever make it over to the Switch or is that hoping for a lot from a smaller-sized studio? Let us all know down in the comments and then feel free to discuss. For more on Frostpunk, keep checking back in here. We will do what we can to keep you fully updated.