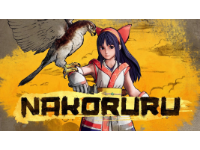 There have been looks at the characters for the upcoming Samurai Shodown already, but none of them have featured one character specifically at a time thus far. This is apparently an issue out there that needs to be rectified. How are we supposed to get an understanding of a specific character in the game if SNK will not just show them doing their thing? Wait. That is what we are about to get here for Samurai Shodown this week as well as the following weeks until launch. I guess we will need to just kick back and see how this all goes now.

Yes, this is the first video kicking off the character showdown for Samurai Shodown with many more to come. This one highlights Nakoruru in the game and just how she will be back in the game for us to enjoy. The video here is a little on the short side, so it is hard to actually be able to get a solid feel for the character. In the end, though, she does look to bring back the level of gameplay we have come to want in a Samurai Shodown game. All the blood with a high risk/reward payoff. Even if that is hard to glean from the following video we have here. Take a look and see just what Nakoruru brings back to the franchise.

Today, Samurai Shodown is kicking off a weekly series of character reveal videos featuring the unique fighting styles and abilities of its roster of deadly combatants. First up, the young Kamui warrior Nakoruru, a long-running staple of the Samurai Shodown universe, is here to show you her nature-inspired move set along with the help of her trusty pet hawk Mamahaha. Nakoruru will do anything to protect her beloved Mother Nature, and that includes death for those who dishonor her.

Are you happy to get character videos for Samurai Shodown or were you hoping to get something a little more in-depth for each? Does this fully explain how the character is going to handle in the final game or just show off some of the cool things the professionals can pull off? What other characters are you excited to see back in the fight for the franchise? Let us all know down in the comments and then feel free to discuss. When we have more to share for Samurai Shodown, we will share it all here. All you need to do is keep checking back in. We will not let you down.