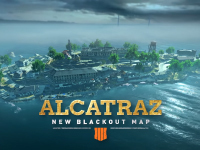 The next Call Of Duty: Black Ops 4 Blackout map is here with Alcatraz forcing more close-quarters combat in this Call Of Duty title

It is time to recreate The Rock in Call Of Duty: Black Ops 4 as the next map coming to the Blackout mode is here with Alcatraz. At least try to do it while fighting off all of the other issues going on with the Battle Royale gameplay that will be going on in the map. I am sure that Treyarch has you covered in a way to be able to do it if you can get all of the other players in on it all. Maybe not. At least it would be a very Call Of Duty thing to do if someone was able to pull it off. It fits not just the setting but also the story of the film a bit. I am somewhat surprised that did not happen here.

I am getting off topic, as usual, but as of now, PS4 owners of this Call Of Duty can download and play in Alcatraz and all of the fun it brings. It is stated to be one of the more closed quarters of maps given the island setting and how tight the jailhouse is. It will change the flow of this mode in Call Of Duty just a bit and could be the next big thing for all gamers out there. It could just be another novelty with the Season Pass DLC for the game. I am sure you will all be over this for now or will be waiting for the DLC to hit the other platforms in a month.

The new Blackout Alcatraz map is set in a fog-filled island boasting a variety of environments that all lead up to the big cellhouse atop the hill. Requiring new strategies and tactics, players will drop in, gear up and fight through both close-quarters combat and long-range exterior firefights as they battle to be the last squad standing.

Alcatraz is launching in addition to the original Blackout map, so players will have two distinct maps to choose from when jumping into the mode.

Is this the next big map you wanted for Call Of Duty or will it be one just for the mix of things? Do you think that someone will try to recreate the mentioned film or will that just be a pipedream for now? Do you need to wait another month still or do you get to download and play right now? Let us all know down in the comments and then feel free to discuss. For more on Call Of Duty: Black Ops 4 and the franchise in general, be sure to keep checking in here. We will keep you as up to date as possible.