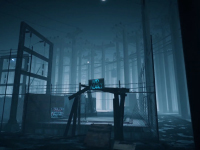 If you felt like you missed out on The Inner Friend when it launched last year on the PC, good news, you can still pick it up and play on your PC. If you are not part of the PC gaming culture, then you will be glad to know that PLAYMIND is bringing the game over to the PS4 and Xbox One this coming Summer. When in the Summer? That is a good guess. Just know that The Inner Friend is definitely coming to these consoles and you can prepare yourself a bit more by watching the mind-bending title. You can see what I am talking about in the latest trailer for the game that we with this little announcement.

For those who are wondering, these versions of The Inner Friend will not include anything that the PC gamers had or did not have already. It will be the basic game making the jump over almost a year after it originally released and just accessible for those who do not have a gaming rig set up in their homes. Not the biggest of shocks, but I know how humans like to complain about things and I figured I would get it all out there now. There is no reason given as to why The Inner Friend did not originally release with all of these platforms either before you start to dig into that too. Just be glad.

Descend into an eerie world made of scattered memories and unresolved traumas and explore a nightmarish landscape where you will come face to face with childhood fears and nightmares.

The Inner Friend is available for PC and is coming to Xbox One and PlayStation 4 this summer 2019.

Have you played The Inner Friend already or will the console version be your first chance to give the game a go? Do you think there was some bigger reason for it not coming to the consoles in the first place or does that even matter anymore? Do you suspect that it will be coming near the end of the summer to hit those demographics that horror games usually go for? Let us all know down in the comments and then feel free to discuss. For more on The Inner Friend, be sure to keep checking in here. We will have all the gaming news that we can get out there on the site for you.