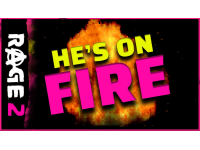 This is going to sound like a huge joke for RAGE 2, but it has been overly stated that this is no joke even though the date would normally dictate otherwise. What we have here is a new bit of pre-order DLC announced from Bethesda and Avalanche Studios for the game that will mix in a classic announcer into the game. Tim Kitzrow will be bringing in his voice for RAGE 2 to give us some nice commentary as we shoot and kill everything out in the wastelands. All in terms of a nice Cheat Code we had back in the day for NBA Jam and various other games over the years.

It is listed as an extra pre-order bonus for RAGE 2 and stated to be true for those who are getting the game before launch. You can see how this will play out when activated in the final game to add a little extra flair into it all. I can see it getting overplayed rather quickly when playing through RAGE 2, but it is something many other gamers out there may enjoy. Maybe this will get you to throw out the cash now to secure your copy of the game and all of the other pre-order bonuses coming to the game as well. It is free for now, so why not?

We’re turning up the heat in RAGE 2 with the “He’s on Fire” cheat code — no joke! When enabled, legendary voice artist Tim Kitzrow takes over to narrate every bit of the insanity. Now you can face off against your foes with a familiar voice cheering you on — you can do it!

What do you think about this pre-order bonus for RAGE 2 and will it truly be something real after today? Do you see it getting played out rather quickly or will it add constant fun to the game in the longer run? Could this be one huge joke that never comes to fruition or is it just the timing of it all to drive us mad? Let us all know out there what you are thinking down in the comments and then feel free to discuss. For more RAGE 2 news and updates, be sure to keep checking in here. We will have it all flowing out there as best we can.