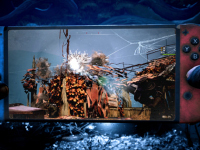 There has been a lot to come out of GDC this year and another cool announcement that came out is that Mutant Year Zero: Road To Eden will be heading to the Nintendo Switch. All announced in one of the best ways by The Bearded Ladies as they point out just how they can export the game to the new platform from the Unreal engine and are doing just that. Of course, there is a bit more than just that but it is almost never presented in that way. Nonetheless, we can look to have Mutant Year Zero hop to the Switch on June 25th now to the delight of many who may have missed out or wanted to take the game on the move.

If that is not something that interests you for Mutant Year Zero, then thanks for sticking around as we have something for all players out there. On the same day that the game is coming to the Switch, we will be seeing some new DLC and expansion added in. The finer details on just what that will bring to the game is still up in the air. It does at least sound like it will be more story kind of stuff added in as we have already seen the first new mode come to Mutant Year Zero. I guess we will see here soon as June is not too far off.

Were you waiting for Mutant Year Zero to come to the Switch before you gave it a go or will it just be another way to play for you? Will it live up to the way it looks and plays on the other consoles or will there be a downgrade for the Switch? What do you think will be included in the expansion DLC for the game and will it be a big new story added in? Let us all know what you are thinking down in the comments and then discuss. For more Mutant Year Zero: Road To Eden news and updates, be sure to be right here. We will keep it all coming at you as fast as we can.