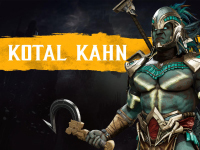 The announcement that Kotal Kohn was coming to Mortal Kombat 11 given that he showed up in the story trailer and other views in the past. That is not the news here, though, as we have new gameplay from the game and NetherRealm Studios has shown him in action fighting Jacqui Briggs in the latest trailer for the game. Even though it is listed as his reveal trailer, it truly highlights the other character and level in Mortal Kombat 11 more than Kotal. Not that this is an issue at all. It is just worth noting if you were expecting to 'main' this character when the game launches.

What we will see here is that Kotal and Jacqui have changed drastically from the past Mortal Kombat title. This is in the best of ways as both of these characters were passable for me before, but look to fit my playstyles a bit more now. Even without adding in the ability to create our own fighting style for the characters in the game. I can only imagine being able to use the new jaguar abilities and kickboxing styles in Mortal Kombat 11 with the respective characters. Have a look down below and see just what I am talking about as well as the spectacular fatality that comes with it all.

Kotal Kahn is an Osh-Tekk warrior and Emperor of Outworld. Years ago, Kotal saved the Empire from chaos and claimed the throne of Kahn. Now his reign is plagued by rising tensions at home and abroad. Determined to keep order, Kotal wrestles with the temptation to exercise the same brutal tactics as his predecessors. Kotal summons the power of the sun to strengthen his abilities against his opponents. Additionally, a more in-depth look at the fighting style of Kotal Kahn’s opponent, Jacqui Briggs, is showcased in the trailer with her implementing experience as a competitive fighter trained in kickboxing and martial arts.

Even if those are not characters you are looking for in Mortal Kombat 11, we have a bit more for you in the way of the Closed Beta coming for those who pre-ordered the game. We had the dates earlier in the week, but now we know that we will be getting five characters to play with and a few more modes. This includes the same multiplayer gameplay we saw before, but will also have a single-player mode and the Tower of Time added in. I am guessing this will be more to test the leaderboards of Mortal Kombat 11 on top of the online fighting, but it is at least more than we saw before. Get ready for all of that to kick off soon.

The Mortal Kombat 11 closed beta begins next week on Wednesday, March 27 at 8 a.m. PDT in North America and will run through Sunday, March 31 at 11:59 p.m. PDT. All players who pre-order Mortal Kombat 11 on PlayStation 4, PlayStation 4 Pro, Xbox One or Xbox One X at select retailers will receive access to the closed beta, which features five different characters, each with unique abilities and Fatalities, including fan-favorite fighters Baraka, Jade, Kabal, Scarlet and Scorpion.

Players participating in the closed beta will experience a preview of the all-new Custom Character Variation System, which will offer nearly infinite customization options to personalize fighters with a variety Skins, Gear, Special Abilities, Intro and Victory Cinemas, Taunts and Brutalities. Gameplay modes offered in the closed beta will include online multiplayer matches, along with Towers of Time, a single-player mode where players can test their skills through various challenges, providing more ways than ever to continue the Mortal Kombat 11 experience.

How are you feeling about Kotal and Jacqui in Mortal Kombat 11 based on all of this? Do you think it matters how they fight given the new way to customize all of the characters or will it be a concern? Are you excited for the upcoming closed beta or is it still too bare bones for you to truly enjoy? Let us all know down in the comments and then discuss. We will have much more for Mortal Kombat 11 and will have it all here for you. Keep checking n here for all of those updates as we get closer to the release of the final game.