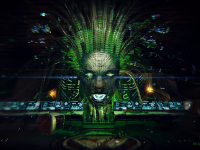 It has been a rocky start and continuation for System Shock 3, but that has not stopped Otherside Entertainment from working on a game they obviously love and want to get out to the public. That how all developers should be and even in the wave of ditching the publisher for the game, they are still making strides into getting it out there and pleasing all of the fans out there. This is made more evident by the latest teaser we have for System Shock 3 that was made part of the Unity Keynote during GDC this year. It makes sense given how it is being built and the traction it will bring. Even if we know little else for the game at this point.

While it is amazing to have a little bit more for System Shock 3 here to share, do not get overly excited as it is a very small clip to take in. It is all from a pre-alpha state of the game, but it does look to be actual stuff from it. Even SHODAN makes an appearance in it for those wondering on the System Shock lore of it all. Just do not expect much else from it as it is just a teaser. You can enjoy the little bit just below and then let the speculations and fun fly. I just hope that it does come to market in the long run of things here…

Do you have any new thoughts on System Shock 3 based on this little tease that we have here today? Do you think that this pre-alpha footage looks amazing and will it make it into the final game? Do you think that we will still get the game even with the missing publisher and everything else? Let us all know down in the comments and then feel free to discuss. We are keeping an eye out for more on System Shock 3 and will add it to the site when we find it. Just be sure to keep checking in for all of that in short order. At least, we hope a short order.