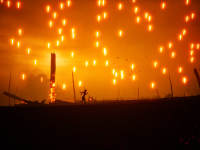 A new title, Stela, is announced will be bringing its artistic platforming gameplay to the Xbox One and PC sometime this year

While it will be on full display at GDC this year, we have the official announcement of Stela coming at us to bring another artistic style game into the fold of the PC and Xbox One. I am not talking in terms of some fancy paint style program but in terms of a new platformer from SkyBox Labs that will place us in a very artistic world while needing to navigate puzzles and the world. It sounds a lot more high-concept than it actually is here, but that is not a deterrent for Stela in the least bit. At least at this stage of things, as all we have is a trailer to go on at this point and not much more.

Well, that is not completely true as we do have a little blub for Stela to give us some insight into what is going on in the game. It looks to be a traditional side-scrolling platformer with some 3D elements. All so we can follow along with the protagonist as she traverses a decaying world and figures out how to survive giant beasts. All while changing the environment and solving those puzzles mentioned before. Not the most groundbreaking of ideas, but it does look beautiful and Stela does look to fall in line with other titles like Limbo and Journey. Maybe that is just how I see it though.

Stela, a cinematic platformer about a young woman witnessing the final days of a mysterious ancient world, will release onto Xbox One and PC in 2019. SkyBox Labs, co-developer of Halo Infinite, will debut Stela at GDC 2019 as an official selection in Microsoft’s ID@Xbox Developer Showcase.

Overcome daunting challenges, treacherous terrain, and gargantuan beasts while traversing a decaying land. Manipulate the environment to solve elaborate puzzles and creep past dangers under cover of muted landscapes, all set to an original soundtrack. Survive sweeping environments including mysterious towns, haunting forests, and massive subterranean ruins brought to life in an atmospheric experience.

What are you thinking about Stela based on what little we have to see here? Do you see it as the next award-winning platforming title that will move you to tears or will it be just another platformer? Do you think having the co-developer behind Halo Infinite will help out or is that just name-dropping at this point? Let us all know down in the comments and then feel free to discuss. When we have more to share for Stela, we will share it all here. Just stick close to the site and you will get to see it all.