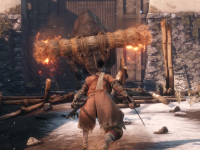 The latest trailer for Sekiro: Shadows Die Twice is here and with it comes some new bosses and enemies we can expect to fight in Sekiro

There is just over a week left to wait for Sekiro: Shadows Die Twice and now is the time that it looks like FromSoftware will be diving deeper into all of those bosses and enemies we have been waiting for. At least if the official launch trailer for the game that just dropped is any indication from it all as we get to see all kinds of new beasts and monsters mixed in with a load of story bits going around it all. Sure, it does not do much in the way of keeping players surprised in many instances of Sekiro, but it does great for marketing. You can take that as your first spoiler warning in the instance you do not want things shown to you before the game launches on March 22nd.

Now that you have been warned, you can make your choice on spoiling things for Sekiro if you have not jumped on down already. Here you will see the Burning Bull among many other enemies in addition to many others we had yet to see. We also get to see some of the other ones from promotions in the past for Sekiro like the Witch. That is the name I believe they gave the creature on the bridge at least. Given how these games generally go, your guess is as good as mine until the official lore pages get out there. That or someone makes them on some Wiki page for all to share. It will come, I am sure of it.

Take revenge by any means necessary. Become the “One-armed Wolf” and rise from every fall when Sekiro: Shadows Die Twice releases on 3.22.2019.

Winner of “Best of Gamescom” and “Best Action Game” at Gamescom 2018, Sekiro: Shadows Die Twice is the next adventure from developer FromSoftware, creators of Bloodborne and the Dark Souls series.

Explore late 1500s Sengoku Japan, a brutal period of constant life and death conflict, as you come face-to-face with larger than life foes in a dark and twisted world. Unleash an arsenal of deadly prosthetic tools and powerful ninja abilities while you blend stealth, vertical traversal, and visceral head-to-head combat in a bloody confrontation.

Did you go ahead and spoil some of Sekiro before launch or are you holding back for next week? Does know what is in the game spoil you at all even if some of the creatures look tied to story bits? Do you even care about this and just want to punish yourself with this game already? Let us all know down in the comments and then feel free to discuss. Of course, if there is more for Sekiro: Shadows Die Twice out there we will share it. All you need to do is keep swinging back by the page here to see it all and be completely up to date for the game.