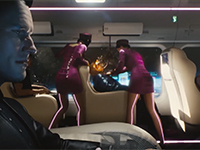 It has been quite a bit since we last saw anything for Cyberpunk 2077 out there as the team is still working hard on it to live up to all the hype we have built around it. It is no secret that CD Projekt RED will place it out there when it is ready and that seems to also go for the basic updates. That is why it has taken so long to get something more than "Cyberpunk 2077 will be at E3" as an update. That is why I am glad to bring you more on the game and how it is being made. All through the behind-the-scenes style video series that the developers have been running out there as of late.

You can see the full video just below, but the highlights are more on the development of Cyberpunk 2077 instead of actual gameplay. To my knowledge, it does not look like there is much in the way of new footage, but we do get to find out that the game will still be set in the tabletop setting for the most part and why certain choices were made. Thankfully, they did not force themselves into a corner by taking the setting as Cyberpunk 2077 will be set fifty years forward in time from the source they are pulling from and in a different timeline. This way we can see and hear about all the things we love from the pen and paper version but get a fully developed video game from the team.

PlayStation goes behind the scenes with CD Projekt Red to bring you an exclusive look at their ambitious upcoming project, Cyberpunk 2077.

If you are like me and are jonesing for more gameplay for Cyberpunk 2077, then you are going to be let down a bit more again. We do not have anything in the like, but the original video mentioned in the above video is included here for your viewing pleasure again. Here is that forty-eight-minute demo from last year's E3 to get you all hyped up for what the team will bring us this year. We might even have one more, smaller video leading up to the event but there is nothing confirmed for that as of yet. We will just need to take what we can for now.

Watch 48 minutes of official 2018 gameplay from Cyberpunk 2077 and get a glimpse into the world of perils and possibilities that is Night City — the most vibrant and dangerous metropolis of the future.

Is this the kind of update you were looking for when it comes to Cyberpunk 2077 or did you expect there to be more? Do you like that the team is still playing close to the source material or would you rather have taken on the setting and ignored the rest? Do you suspect that we will have another huge gameplay drop before E3 or will it be months after for those not lucky enough to go behind the doors? Let us all know down in the comments and then feel free to discuss. When we have more to share for Cyberpunk 2077, you know we will share it with you. Just be sure to keep coming back to the site for all of that.