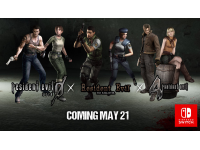 Great news for those few out there who are fans of the Resident Evil franchise and only have a Switch to play games on. Also, it goes for those who out there who may want to take some of this horror on the move. Capcom has recently announced that three remake titles from the Resident Evil franchise will be making the jump to the Switch on May 21st now. Specifically RE0, RE4, and the original remake that we all had a while back. Still no word on the other titles in between there making the jump, but it could still be possible at some point.

Starting on February 28th, you can pre-order these Resident Evil titles on the eShop for the Switch with the Origins Collection available for physical purchase at a later date. So, if you want to physically own RE1 and RE0 in one bundle there will be that option. Even though we do not have any prices for all of this as of this posting, it could be a fun way to expand your Resident Evil love just a bit more. Now if only we could get all of the titles in a great remake and bundle for all consoles. The dream lives on for some of us true fans out there…

Play all three masterpieces anywhere, such as:
- On trains 🚆
- During mansion tours 🏰
- Across the European countryside 🌄

Have you been dying to play Resident Evil on the Switch or will this just be one more way to cash in on the big success of the previous two releases out there? Do you think we will ever see the other titles make it over to the Switch or are those still to beefy to be able to run on the system? Would you want to have all of the titles in one solo spot or just the teams to focus on making a whole new title? Let us know what you are thinking and then discuss down in the comments. As we have more updates for Resident Evil, we will bring them all here. Just be sure to keep checking back in for all of that.