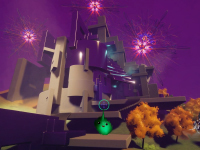 If you have been hiding under a rock until now you may have missed that we will be seeing Dreams hit the PS4 in a weird form of Early Access sometime this Spring. I say weird as this is not normally the case with a vast majority of games on the platform, but as Media Molecule is one of those teams that Sony has under their umbrella it makes sense to do so. More so when you look at Dreams being a very fancy game design engine in the guise of an actual game. Much like their other titles that have come out. I am hoping we will see some form of gameplay mixed in, but so far all we have seen is what can be made and shared with others who have the "game."

This latest video that we have for Dreams is not too different as it takes a deeper look at how an area can be crafted in the system. In fact, it shows off what can be created in about 30 minutes if the user has a general idea of what they want to make and happens to be artistically inclined. This "speed run" of a video is being handled by the Art Director of Dreams so it is safe to assume they know what to do as well as an idea of what to create. It does show, though, what can be done in a design jam session if someone has an understanding of the system though. Have a look and see the basics that we can do and then wait for the P.T. recreation when the Early Access starts this Spring.

Do you still see Dreams as a game at all or is it just a fancy way of making gamers pay for a game engine to build with? Do you think that there will be some kind of story or campaign as LittleBigPlanet had or will it just be what users create? Do you find this an interesting item for the PS4 still or would you rather dive into a game engine like Unity or Unreal to do what we can here? Let us all know in the comments and discuss. When we have more for Dreams, we will share it all here. Keep checking back in for all of that in due time.