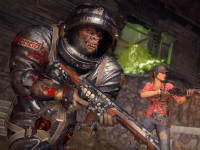 The next round of DLC is here for Call Of Duty: Black Ops 4 and with it comes many weird things that we do not normally see in Call Of Duty titles

You had better be ready for more Call Of Duty: Black Ops 4 as it looks like the next DLC is here. At least for all of you PS4 users as it is all still a timed exclusive release. That can work out well for the PC and Xbox One crowds if they are hesitant to dive into what Treyarch is bringing, but at this point most of you most likely have a Season Pass for the DLC and it is just teasing you at this point. No matter the case, the latest DLC for this Call Of Duty title is here for some to enjoy and we have a fresh new look at what will be inside it all. Get ready to have some internal questions…

Today we get to see Operation Grand Heist expand out Black Ops 4 that will bring along some new cosmetic changes, maps, and the return of Outrider with more to come apparently. Just what you all want? It also looks as if they are mixing in a lot of the weird not normally seen in Call Of Duty but is all the rage in other games that have similar modes and maps in it. You know what I am talking about. This is also something I never figured we would go fully into for a Call Of Duty title, but here we are and it looks like we will see this going forward. Have a look at the trailer here to get a better visual of what I am speaking of.

This right here is a sign, to me at least, that the developers are giving gamers what they think they want in a Call Of Duty but will complain about later. Much like all of the other forms of media out there that mix in weird and outlandish things because the "internet knows best." Do we really need to have car chases and heists in our Call Of Duty games? Are there not many other titles that have been doing this well for years that we could fall back on? There surely are. This just feels like a push to tap that market to me and it is all packaged with a nice little Cosmic Silverback costume to force the point. Maybe that is just me?

What are your thoughts on this new DLC for Black Ops 4? Is it following suit as you would want or is it trying to cash in on the dumb of the internet that will be a fad for a few weeks until gamers go back to what they know? Am I the one out of touch here and all of this fits perfectly along with what you want out of your serious FPS experience? Let us all know down in the comments and then feel free to discuss. If there is more to share for Call Of Duty: Black Ops 4, we will share it all here. Just be sure to keep checking back in for all of that as we press on to the next big release.