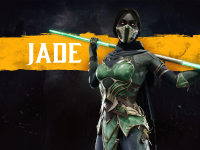 The next character for Mortal Kombat 11 is here and it looks like Jade will be making a comeback in full form and not just a background character. You can rejoice or jeer as you wish but NetherRealm Studios has her in the full roster now and treated the world to a little bit of her action during the latest Kombat Kast. They were apparently teasing her return via social media posts, even though Reptile could have been the result too, and now we have Jade in Mortal Kombat 11. Staff and other moves and all. Maybe we will see that other staff-wielding character, Tanya, at another point…

Anyway, she was revealed and also came with some new gameplay and fatalities for Mortal Kombat. The team has listed her as a range control style fighter that can also move in for the close fight depending on how you decide to load her out for the fight. Given that we can customize pretty much everything for the characters in Mortal Kombat 11, I am not seeing how we are still going to need these labels moving forward. Outside of limiting the characters in ways we have yet to see. Maybe it is just how I am seeing the game at this point and not how the "pros" see it.

In life, Jade was a master assassin, famously known for both her loyal friendship to Princess Kitana and her iconic green attire. Now resurrected by an evil sorcerer, she serves the Netherrealm as an undead Revenant. Death hasn’t slowed Jade down, though. She still thrashes her enemies with her bo staff, razorrang, and patronizing put-downs.

On top of the Jade reveal, we also had the treat of seeing Baraka in motion more than we have in the past. It was not a hidden thing that he would be coming back for Mortal Kombat 11. It is just that we have only seen him in motion during other trailers and some of the gameplay capture we were allowed at the big reveal events. We get to see Baraka in full swing now with a few things that no one had access to before. Like all of the moves and actions he can take when planting his flag in the ground. Have a look just below to see more on how he may handle when you get hands on him.

With two more characters down, how are you feeling about Mortal Kombat 11 at this point? Were you truly hoping for Jade to come back into the game or were you hoping for a Reptile reveal instead? What other characters do you expect to see added into the roster going forward? Let us all know down in the comments and then feel free to discuss. For more on Mortal Kombat 11, keep tuned into the site. We will keep our coverage ongoing as best that we can.