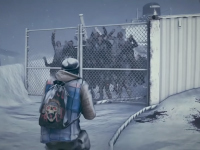 We have a new video for World War Z to take in from Saber Interactive and it is all about the hordes we will face in the game. It makes sense given that this is a zombie game and the story pretty much surrounds all of this in general. No matter if you look at the book or film for World War Z, hordes of infected are everywhere so it makes sense we would see more highlights for them. Even if we have no solid release date on when to expect to play this game this year. We are still waiting on that from you Focus Home Interactive…

In any instance, we have more to look at for World War Z even though it is on the shorter side of the coin. In fact, it has to be one of the shorter clips we have had for the game to date but it does give us a look at more zombies. All of them swarming as insects and other creatures do. All while using that new tech built for the game to its full advantage it would seem. I wish there was more to say for it all than that, but that is where we are with World War Z at this point. I do hope we will see some new and fuller information soon, but we will have to scavenge what we can for now.

In World War Z, you will witness, and attempt to survive, the charge of hundreds of Zombies at a time.

Do you see the hordes of World War Z getting to the point of overwhelming or will they feel just about right in the final game? Do you think we will have the option to obfuscate ourselves from the hordes in the game or will it always be bullets and explosions? What other parts of the game are you looking forward to in the game? Let us all know down in the comments and then discuss. For more World War Z news and updates, be sure to stick around here. We will have them all as we can. As long as we get more to show off at the very least.