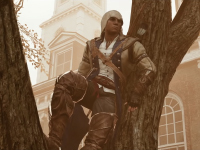 It was slated for March and now we are going to be seeing Assassin’s Creed III Remastered hit us on time here. I will say that Ubisoft did seem to push it out as far as possible, but at least we are now seeing this remaster coming at us during the original timeline placed out there. If you needed more of an Assassin’s Creed fix, then get ready for this remaster to hit you on March 29th for the PS4, Xbox One, and PC. As I said, they went right up to the wire to get that one out there and still make their slated March release back when it was announced to be part of the Season Pass content for Odyssey.

Assassin’s Creed III Remastered will be available for those who picked up the Season Pass or not, a price has not been set as of this writing, and will add to the growing list of titles all in one place for gamers outside of the PC world. This is interesting as the PC version usually never gets an update as it was most likely the best it could be at the time and the consoles made it the reason for the remaster in the first place. Although, given what we can see in the following video we can see how much has been updated for Assassin’s Creed III that it makes more sense here. On top of giving us all one place to get the core game, Liberation Remastered and all of the solo DLC too.

Relive the American Revolution or experience it for the first time in Assassin’s Creed III Remastered, with enhanced graphics and improved gameplay mechanics. Plus, includes all solo DLC and the full game Assassin’s Creed Liberation Remastered.

What did you think of Assassin’s Creed III the first time around and is this the one title you have been waiting to get a full update? Were you getting worried that Ubisoft was going to miss the March timeline or did you figure it would be near the end of it all? How well do you think new players to the franchise will take the drastically different combat systems having played Odyssey as the most recent? Let us know down in the comments and then feel free to discuss. If there is more for Assassin’s Creed III Remastered, we will have it here for you. Just be sure to keep checking back in for all of that as it comes.