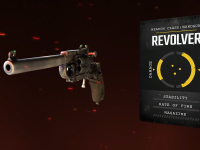 We have more weapons to look at for Metro Exodus now and…they are about the same as we have seen in the past. The only difference here being that we have a better breakdown of how the handgun class of weapons will function in the eyes of 4A Games. I say this as we all know gamers will use them in other ways, but for now, we will look at how they should function in the game. Specifically the Bastard and Revolver from Metro Exodus even though there are a few others shown off in the video here. Given the level of customization we can have for our weapons, it is not too surprising.

As mentioned, we have a look at a few of the handguns we will start with and then modify in Metro Exodus. None of them look to pack a huge punch in terms of damage, but all look to have their uses throughout the world and game. Seeing as we will have some stealth missions or areas in the game, we will need to rely on the smaller and quieter weapons here. It also looks like these will be the option to go full auto and throw out a whole lot of bullets really fast in Metro Exodus. You do not need to take just my word for it though. Have a look below and then get ready for the next update or the game to drop on February 15th.

Take a closer look at the Handgun Class in Metro Exodus. Featuring the Bastard and Revolver.

Is any of this too shocking for Metro Exodus here or is it about what was assumed from all of the other videos thus far? Do you think we will get to customize things even further than we see here or are we seeing some of the best configurations we will get to unlock in the game? Will you try to prove them all wrong by using a handgun through most of the game or will you toss it aside as soon as a heavier hitter shows up? Let everyone know what is on your mind and then discuss down below. For more Metro Exodus, be sure to keep checking back here. We will keep all of these updates coming at you as fast as we can.