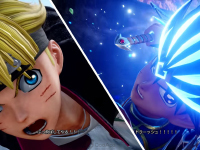 We only have a few weeks until Jump Force hits the PS4, Xbox One, and PC yet we are still getting new characters added into the roster to flesh it out just a bit more. Sure, we have more ninjas to add in here but that is about what most of the IPs that Bandai Namco are using have as their main characters. It is kind of a staple for the genre they are being pulled from and should not be that surprising at this point. At least we are getting a few more characters in Jump Force before the February 15th release date. We can just sit pretty with that for now.

The new characters we have here for Jump Force look to be Dai from Dragon Quest and Boruto from the Naruto side of things. These are more characters I am personally not familiar with in general, but we have more even if they do look to fight about the same. Maybe their bigger moves and specials will alter things up and make them feel like truly new characters in Jump Force. Maybe not. You can see them in action down in the latest video for the game and then get ready to wait just a bit longer for it all to come to market. Not too much longer now.

Generations of ninjas will be joining the Jump Force! Plus, get a magical assist from Dragon Quest’s leading warrior, Dai!

Are you glad to see more characters coming to Jump Force before launch or were you hoping that Bandai Namco would have just offered up a full list at this point? Do you think we are going to see even more before launch or are we getting into the realm of DLC characters at this point? Who else would you like to see make the jump in here or are you set with the characters we have to date? Let us all know down in the comments and then feel free to discuss. For more on Jump Force, be sure to stick around here. We will keep all of that coming at you as best that we can.