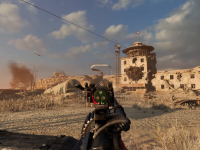 It is time to go deeper behind the scenes with Metro Exodus as we have the next video in the series to take in now and see just how the game is being made. Not only that, but this one focuses a bit more on giving the fans of the franchise what they have been asking for since the first game. That is at least what 4A Games keeps bringing up in the video here. No matter the case it looks like they are truly listening to Metro fans and we are getting more freedom in the game. More in regards to the world and options we have from the very linear versions we have had in the past titles. We will know for certain if that is what fans wanted on February 15th when it launches on the PS4, Xbox One, and PC though.

It seems like a weird thing to focus on here for a Metro title, but the freedom you will hear and see here is more with the leaving of the tunnels and entering the full landscape. It seems to be the antithesis of what the previous titles were all about, but I do like the fact that we do not need to survive and head to specific locations to craft or modify things. All stuff we have known from the past videos for Metro Exodus, but it is a true focus here so it will play a larger role than we may be thinking. Why else would they focus on it as such a major feature in the new game? I could be wrong though.

Watch Episode Two of The Making of Metro Exodus — a three-part documentary series filmed on location in Kyiv and Malta at 4A Games’ two studios as they put the finishing touches on the upcoming Metro Exodus.

Featuring interviews with key personnel at 4A Games, archive footage and photos, and never-seen-before materials from the 5 year development of Metro Exodus from the earliest concept stage, this series takes fans to the heart of the creative process behind 4A Games’ most ambitious project to date.

In Episode Two, we learn about the powerful 4A Engine — the studio’s cutting edge in-house tech — and the incredible attention to detail that goes into creating Metro’s distinctive weapons.

Was the extra freedom in the Metro universe what you have been asking for or does it sound a bit weird to you too? Are you excited for the same things as I here or did you like the specific paths and locations to make it to? Could this all be in the form for Deep Silver to give us a new open world game or will it be a true innovation to the franchise? Let us all know down in the comments and then feel free to discuss. We will have more for Metro Exodus in the future so be sure to keep checking in here to see it all.