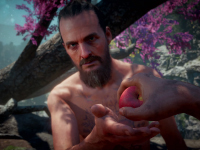 Here we go with more of the story for Far Cry New Dawn fresh from the mouths of Ubisoft now. We have a new story trailer to take in and see just how this new title is not just an expansion from the last title and its own true beast. I mean, outside of being set years in the future from the last game and only really using the same locations for the most part. Far Cry New Dawn does seem to be checking off the items for the rule of 64. We will know for sure on February 15th though when it hits the PS4, Xbox One, and PC for those who want to continue their story or just start up a whole new one in the mix.

Up to now, we have had a bit of the basics for this Far Cry story but now it looks like we have a solid twist coming at us. We knew that it would be roughly seventeen years after the New Eden cult dropped the bombs. Now it looks like they may be our true salvation in the game as the protagonists will be looking to team up with them to take on the new threats roaming around Hope County. At least what remains of it after Far Cry 5 that is. Some would say that is looming towards expansion instead of its own beast, but I can get behind it being a sequel of sorts. It is just the turnaround time that is really sticking here…

Shit just got real. Face off against the ruthless highwaymen and their leaders the Twins as you fight to survive in a dangerous post-apocalyptic frontier. Form unexpected alliances, build a deadly arsenal of makeshift weapons and gear using the remnants of the old world to survive against all new threats. Far Cry New Dawn will be available on PS4, Xbox One, and PC on February 15th, 2019.

I am a bit curious to see if Far Cry New Dawn will be aiming to make Joseph Seed a sympathetic character given the team up and the current state of things. This new trailer does make it look like he is still up to all of his old moves from before, but this new threat could cause something else to come about. It could also cause him to see how he was right in the long run and all fell right into his vision of the world. We will know soon, sure, but it is fun to speculate on it all before Far Cry New Dawn finally does drop out there.

Are you ready for this new story for Far Cry to come out or do you find the turnaround on it too quick to feel like a solo deal? Can you see things going truly dark in the story here or will it stay on the safer side of the apocalypse? How do you think The Father will truly factor into things here and will he still be the villain of the full story when it all ends? Let us know what you are thinking down in the comments and then feel free to discuss. Once we have more to share for Far Cry New Dawn, we will share it here. Be sure to keep coming back to the site to see all of it.