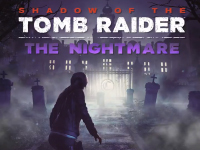 The fourth DLC for Shadow Of The Tomb Raider has been announced and dated here and it is called The Nightmare. A very ominous sounding bit of DLC for Eidos-Montréal to pump out there, but still very fitting with the franchise. At least as I see it. It could be a lot different when we actually get to play it next week on January 22nd, but for now, we will go with what we know. That is the title and the look that we are going back into the Croft Manor in Shadow Of The Tomb Raider. All based on the short clip and tweet that was put out there for the game.

Sadly, that is all we know at this point. It will be part of the Season Pass for Shadow Of The Tomb Raider but also available for purchase separately for those who want that option. If I had to venture a further guess on this, we may be getting something like the zombies mode style of DLC we saw in the last Tomb Raider game. Somehow it may link back into the main narrative as all of the other parts have, but it seems like it could be hard to do. Unless we are living out more of the young Lara nightmares of her growing up as she did. That could lead to some fun. I guess we will find out soonish.

Journey through “The Nightmare” on January 22nd as Lara Croft faces off against familiar enemies and fallen friends. 😱 pic.twitter.com/ouRPCGv538

What do you think The Nightmare will revolve around here for Tomb Raider? Do you think it will be a Zombies mode for the game or will it branch into the story as we have seen with the other bits we have had since launch? Would you like to see it delve further into the young Lara or be more of the mysteries she finds out in the world? Let us all know down in the comments and then feel free to discuss. As we have more for Shadow Of The Tomb Raider, we will share it here. Be sure to stick close to the site so you can see and hear it all.