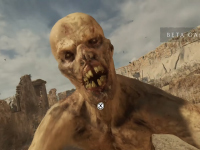 More gameplay for Metro Exodus is here after the last week of media outpour. We had a whole lot but when you think about it, there was not much in the way of actual gameplay out of 4A Games. I am guessing this is because Deep Silver was busy showing the game off to the larger media outlets and keeping the rest of us sated with the smaller announcements. That does not change the fact that we now have some new gameplay form the Summer chapter of Metro Exodus to take in thanks to Polygon. Now we do not need to wait until February 15th to see more. I will take it.

In this new footage, we get to see a bit more of the open world of Metro Exodus that has been touted. All in the setting of a desert in the summer. At least that is the assumption as the chapter is labeled that. It does look a bit more open than we have seen before, but when the firefights kick off it looks to go back to the traditional Metro style of play. The closed corridors and fast-moving mutants charging forward. I fully enjoy the hidden ones that look like dirt mounds that come to life when Artyom comes too close. I can see that leading to some great scares mixed into the world here.

Have a look at the new footage for Metro Exodus just below. More or less it does look like a basic FPS game for those who are not fans of the franchise just yet. There is a solid story mixed in and a full crafting system for weapons too. We get a small feel for that here too. It all still looks rather solid and I know I cannot wait for it to finally launch.

Curious what the next installment of Metro is looking like? Here’s 8 minutes of gameplay from the developers, showing off a series of sequences from the “Summer” chapter.

How are you feeling about Metro Exodus after this latest gameplay? Do you agree that it looks like there is more basic FPS gameplay mixed in or is it just how this player went about it? Do you think we will have a lot of closed hallways at some point in the game or will it stay focused on the open world? Let us all know down in the comments and then discuss. For more on Metro Exodus, be sure to stick close to the site here. We will keep it all flowing to you as best that we can.