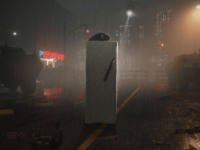 Survive Raccoon City as the Grim Reaper and… a block of tofu?

Unlockable bonus modes make their return in Resident Evil 2 with The 4th Survivor and The Tofu Survivor, included with #RE2 at launch on January 25! pic.twitter.com/NR75CQlECX

The demo for the Resident Evil 2 Remake has finally been out there for a bit longer and more players have had a chance to get through it all to unlock the special trailer for themselves. It took mere hours before it was seen and uploaded from the start to Capcom's dismay, but we should all know now that Hunk and Tofu will be in the game in some capacity. It definitely looks like one will be a character skin in this Resident Evil game and the other may have more of a story to them. All based on the teaser we had at the end of the trailer. But now we have a little bit more to look at and then speculate on as we wait for January 25th to hit us on our PS4, Xbox One, and PC.

What we do have here today are a few better quality screenshots from the Resident Evil 2 Remake that are about those two characters. Both in some kind of playable state and given the different locations for the two, it could be somehow their own little segments. Maybe we will see something like we with Ada and Sherry already, but Tofu seems like it would be something that would shatter immersion if that were the case. Just like all of the other truly silly things that we have had a chance to play with in the Resident Evil universe. Have a look at the screenshots and see just what I am talking about. If you are still out of the loop on the trailer mentioned here for Resident Evil 2, you can see it just below. Or see it again in better quality now that we have had time for someone to play and capture it in a better way. That is at least if you do not want to give the demo a play and see it on your own system and not as a streaming video online. You do what you want though or just wait until Resident Evil 2 drops here in just under two weeks. It is hard to believe it has come up that fast…

Horror fans around the world will get an intense sneak peek at Capcom’s hotly anticipated title Resident Evil 2 Remake before its launch with a special demo event starting this week for PlayStation 4, Xbox One and PC players via Steam. Available to download for a limited time from Jan. 11 to Jan. 31, this will be the first opportunity for fans to experience the completely reimagined horror classic from home.

The end of the demo reveals a brand new cinematic trailer exclusive to demo participants. While players cannot restart the playable demo after their time is up, there are no limitations on how many times the trailer can be viewed.

In the “1-Shot demo,” players step into the boots of rookie police officer Leon S. Kennedy as he arrives at Raccoon City Police Station in the ultimate worst first day on the job. Leon must survive vicious zombies and solve puzzles to find safe passage out of the station. With an entire building of flesh-eating nightmares lurking between Leon and his escape while the clock ticks down, players need to be sure they’re killing more than just time.

Have you beaten the demo for Resident Evil 2 yet or are you still waiting to give it a try? Do you think these are just character skins for the core game or leading to something else being confirmed along the way? Why are so many obsessed with the block of tofu in the franchise? Let us have those answers and more down in the comments and then feel free to discuss. When we have more for the Resident Evil 2 Remake, we will update you here. Just keep coming back to see all of that as it flows out there.