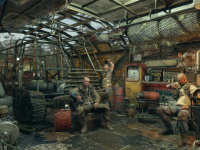 We knew there would be more for Metro Exodus this week as Deep Silver is pushing for the upcoming release and now we have the next big thing to look at. If you have not guessed it or scrolled down just yet, it is the latest story trailer for the game with some new visuals and characters to take in as well. All narrated by Anna on top of that as we get ready to leave the Metro and head out into the world that has been left behind. We will still be isolated to the Russian wastelands, but it seems like the story is aiming to open everything up just a bit more as we take on enemies new and old. Just as every post-apocalypse game or story does.

Granted, Metro Exodus is based on a best-selling book so we know the story should be on par as long as 4A Games sticks to the material. I mean, they could deviate and force us into a basic game loop with little payoff, but based on what I have played so far for Metro Exodus I do not see that happening. We will know for certain on February 15th when the game lands, but for now, we can have a look at just what the story may hold for us all. It does have quite a bit to live up to from the past titles and hopefully, they nail it here.

Deep Silver and 4A Games today revealed the Metro Exodus Story Trailer, featuring a host of new characters and the first look at some of the locations Artyom and his band of Spartans will visit as they journey across post-apocalyptic Russia, from the frozen Winter streets of Moscow to the fiery Summer sands of the Caspian desert.

Narrated from the perspective of Anna, the Spartan Order’s top sniper and Artyom’s wife, the Story Trailer explores the hostile world of Metro Exodus that lies in wait for the crew of the Aurora as they flee the ruins of Moscow and embark on an epic year-long journey into the unknown. Artyom always believed that there was life beyond the Metro — now his hopes and dreams will be put to the ultimate test in the crucible of the Russian wastelands.

Featuring an original score from series composer Alexey Omelchuk, the Story Trailer is just the first in a series of upcoming gameplay reveals leading towards the release of Metro Exodus on February 15 for Xbox One, the all-in-one games and entertainment system from Microsoft, the PlayStation 4 computer entertainment system, and PC.

How does the story for Metro Exodus feel for you so far and do you think it will hold up? Will we get to see other locations on the globe that have survived the apocalypse at some point or will we stick to Russia for this franchise? What are you hoping to come from this game here and will it pay off for you based on what we have here? Let us all know down in the comments and then feel free to discuss. When we have more for Metro Exodus, which should be soon, we will share it for you here. Be sure to keep checking back in for all of that as we march on toward the release date.