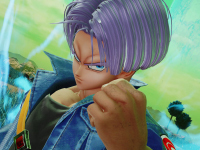 It is story time here for Jump Force, finally, as we have a new trailer that dives right into all of that so we can try to get a reason as to why all of these anime and manga IPs are crossing over for a fight. I mean, outside of Bandai Namco wanting to make a video game that has us fighting with all of these characters for fun and profit. That should be a given as it is not being given away for free on February 15th. It would be nice for that to happen but they need to have a reason to be putting out Jump Force with all of these IPs and the ability to make our own characters. Yes, we also have a small look at the character customization as well with the reason for all of this.

More or less, the story of Jump Force has it so that the real world and the manga worlds are being forced into one reality via the Onyx Book. One villain wants to do this and we, and the other heroes, have been forced to jump in and stop it. The organization doing all of this, Jump Force. Not too creative, but at least we get to see what the characters from Death Note are doing here if they are not playable. We also get to be the creative ones here as it does look like we will have access to all of the assets of the characters to craft our own hero as well as use their moves to make them the best around. That is at least the assumption based on what we have here to look at.

In addition to all of that, we also get to see four more characters in motion here for Jump Force. Astra from Black Clover, Boa Hancock from One Piece, Ranji Abarai from Bleach, and Trunks from Dragon Ball are also here to help us all out. There is not any specific gameplay showing off how they will differ from other characters in the game, but they will be in there to further pad the roster of characters we have been looking to fight with. Have a look down below and see the story and characters for yourself.

A sudden merging of the Jump World and the Real World has caused chaos across Earth, with invading villains leaving a trail of destruction and panic in their wake.

To tackle this new threat, a new team of heroes, named the Jump Force, is formed by Director Glover featuring the strongest fighters from across the manga universe. Players will create their own hero, customizing their look and fighting moves with elements across all manga franchises, before joining up with the Jump Force to stop the villains in their tracks.

The trailer also provides a first glimpse at the Onyx Book, a powerful device suspected of having something to do with the mysterious merging of the two worlds.

Jump Force launches on February 15th, 2019 on PlayStation 4, Xbox One, and PC Digital.

Did you figure this would be the story for Jump Force here or were you looking for something a bit deeper at the end of it all? Does it make sense now why other characters have been added in but are not playable, or does that still bother you too? Which version is the real world or are all of the characters invading in a way? Let us know what you think in the comments and then discuss. When we have more to share for Jump Force, we will share it all here. Be sure to keep on coming back so you can see and hear all of it as it is released into the wild.