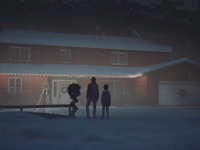 We have been waiting for the next episode for Life Is Strange 2 for a bit now and last we heard it was coming in January at some point. Nothing had been set in stone as DontNod tried to get the game to a place where it would meet our ever-demanding standard when it comes to our games. Especially with an IP like Life Is Strange, we are going to be critical and thankfully, Square Enix let them take that extra time. Now we are back with a new update and word that we will be playing this second episode on our PS4, Xbox One, or PC on January 24th. Yes, we have a release date and it is not too far off.

Weirdly, to go along with this announcement we also have a new live action trailer for Life Is Strange 2. Not something I was expecting, but it is what it is. It does at least use the voice actor as an actual actor as they recreate the way the first episode ended in a live action way. That and give us a very small tease as to what to expect in the second episode of Life Is Strange 2 in January. Not exactly what I wanted for the game, but we will all have to take it and deal with it for now, as it is all that we have to go on. At least we have a date and a tease should be the solid takeaway here.

The second episode of Life Is Strange 2 will launch on January 24, 2019 on Xbox One, PlayStation 4 and PC (Steam)!

Gonzalo Martin, the voice of Sean Diaz, stars in a live-action visualization of a pivotal moment on the brothers’ journey in Life Is Strange 2.

Did you figure that this episode for Life Is Strange 2 would land near the end of the month or did you hope it would have been at the start of the new year? Are you curious as to the use of live action here instead of gameplay or does it fit given that they did use the actor? Did you just accidentally spoil the end of the first episode by watching this without playing? Let us all know down in the comments and then discuss. When there is more for Life Is Strange 2, we will share it all here for you. Be sure to keep coming back so you can see and hear all of that as it is released.