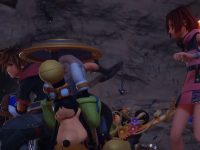 If you are in a Kingdom Hearts III media blackout due to the leaked versions of the game out there, then why are you clicking in here? Not that we are going to spoil anything for the game before January 29th, but that means you are not going the full mile when it comes to that blackout. For those who like to live dangerously and have come here to see something new that Square Enix has officially released for Kingdom Hearts III, then get ready for a treat as we have the latest trailer for you and it dives into more gameplay and themes of the game that we can expect. At least as we can see without the true dialog being spoken on the screen.

As you can see below, we have a trailer titles the Final Battle, but it does not look to be that way here for Kingdom Hearts III. It shows quite a bit of gameplay to entice us more, but what stands out here has to be the Lilo & Stitch and Ratatouille based stuff. One being a “link” summon and the other being a special way to use the Keyblade in the game. Nothing too spoilery for us but enough to keep us looking for more for Kingdom Hearts III. At least without diving into all of those spoilers that are making it out there for those who truly look hard for them. You do you though.

Sora and friends gather for the ultimate battle between light and darkness with today’s release of the latest Kingdom Hearts III trailer.

As unexpected events began to unfold in the Disney worlds at the hands of the enemy's dark ambitions, the heroic trio of Sora, Donald, and Goofy find adventures ahead, from aquatic battles in the world of Pirates of the Caribbean to dances with the townspeople in the Kingdom of Corona from Tangled. The new footage also showcases Stitch from Lilo and Stitch as a special “link” (summon), as well as cooking-themed Ratatouille Keyblade attacks.

Footage of Kairi wielding a Keyblade and what may be a glimpse of Sora’s Nobody all point to new pieces of the title’s storyline.

Was that enough Kingdom Hearts III for you for now or are you looking for something more? Do you like how the other two franchises are worked in here or were you hoping for more that have yet to be revealed? What worlds are you still holding out for in the game and do you think they will come when the game officially launches? Let us all know down in the comments and then feel free to discuss. For more Kingdom Hearts III news and updates, be sure to keep coming back to the site. We will keep pumping them out and trying not to spoil too much for you.