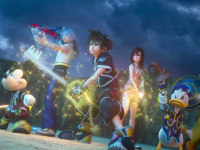 In just a little over a month we will be keyblade deep in Kingdom Hearts III in the best of ways, but that does not mean we have to wait for the opening video for the game. At least something that is being called that is here for us to spy upon for the game from Square Enix in the latest update that we have for it all. When you have a look at it, you will get to see a nice recap of the previous Kingdom Hearts titles, but it does seem to be a bit out of sorts for a true opening to a video game. I could be completely wrong here, but that is how it all looks and feels to me at this point. Thankfully, it also does not look like it is here to spoil anything for the upcoming title in the franchise.

What this new video does feel like is a way for Kingdom Hearts III to show off that it has some huge fans behind it who are lending their talents to the game to get you further excited. If you listen to the music here, we have a new track called Face My Fears that Hikaru Utada and Skrillex have put together. Not a bad deal, but it looks more as if this video was put together to highlight that more than the actual game. Have a look for yourself and see if it gets all of your hype glands going at complete efficiency here. My guess will be that it does, even if there is nothing new to take in for Kingdom Hearts III here in terms of the game.

The opening movie sets players up for the events to come in Kingdom Hearts III, as the ultimate battle for light and life comes to an epic conclusion. With the help of his loyal companions Donald and Goofy, Sora will team up with iconic Disney and Pixar characters in an attempt to defeat the darkness and save the universe.

Skrillex, a long-time and self-professed fan of the Kingdom Hearts series, shares a close friendship with Hikaru Utada, which fostered the original collaboration, Face My Fears, to celebrate the game’s release. Set to be released on January 18, 2019, the track has been produced in collaboration with Poo Bear, the acclaimed record producer who previously produced Justin Bieber’s multi-platinum selling single, What Do You Mean?

What did you think of this new song that was put together here for Kingdom Hearts III? Does it fit what you would expect for an opening movie or is this just a bit more on the promotional side of things using old footage with the new song? DO you think this will be how the game actually opens up or will it just be what plays after the company logos and before the start screen so you can have a small and basic recap of the franchise? Let us know what you are thinking down in the comments and then feel free to discuss. There should be more for Kingdom Hearts III leading up to the release and when there is, we will have it here. Stick around so you are up to date on it all.