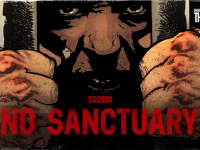 New content is here for Overkill’s The Walking Dead now as the second season of the game is here for the PC version of the game. The console versions are still waiting to release until February 6th of next year, but that does not mean that Overkill is waiting to bring more content out there to keep things flowing as promised. Especially since this is the first episode of this new season of content with the rest rolling out much like the episodes of The Walking Dead show. Not exactly in line with those, but in the same manner and ending June of 2019 with the final episode if this new content for the Deluxe Edition owners out there.

The story for this obviously picks up where the core version of The Walking Dead left off and the survivors facing more threats out there. All including a new enemy that is holed up in the Capitol Building of Washington D.C. There are also a few other things mixed in there and you can see some of that in the latest trailer for the game that we have below. Have a look and see if you are going to hop back in and keep playing Overkill’s The Walking Dead soon.

Starbreeze, Skybound Entertainment, and 505 Games have announced the start of season two of Overkill’s The Walking Dead on Windows PC via Steam. Included for all players who own the standard and deluxe editions of the co-op multiplayer action game, this first major content update introduces a new full-length story mission, improved tutorial support for newcomers and the highly requested addition of in-game voice chat.

Season two picks up with the main group of survivors facing new challenges in the aftermath of season one’s finale, including a powerful new enemy fortified on Washington, D.C.’s historic Capitol Hill. The first episode — “No Sanctuary” — sees players stage a daring raid on a Georgetown church to rescue a potentially life-saving informant. Season two will feature nine episodes from November 2018 to June 2019, containing new missions, playable characters, weapons, mods and other surprises along the way.

In addition to this content update for Overkill’s The Walking Dead, there have been some other changes to the game that new players may not know about from the earlier versions and viewings of the game. That is why we also have a follow-up video to take us through all of that and just how to play the game in general. Something that is pretty straightforward, but it is more to look at for the game if you are still debating on picking up here for some co-op, zombie killing, survivor murdering fun. It is still a fairly solid game worth checking out is all I am saying here.

In this new, gritty world, you need to Think and Fight in order to Live. This Survival Guide is key if you strive to stay alive as Washington D.C. has fallen and walkers and living enemies roam the streets. Learn the basics and then head out into the city.

Have you been sticking with Overkill’s The Walking Dead since launch or will this new content bring you back in for a bit? How do you feel about the changes that have come about due to player feedback and has it changed to be the game you were looking for? Do you think that the console versions will house all of this new content at launch or will they be delayed a bit longer there? Let us know what you are thinking down in the comments. For more on Overkill’s The Walking Dead, be sure to stick around on the site here.