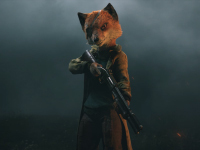 It definitely looks like The Bearded Ladies have been playing a few things close to the chest for Mutant Year Zero: Road To Eden as we have only seen a few of the characters we will have to control in the game when it launches next week. In fact, we have only had the same three playable characters shown off since it was first announced and in everything that Funcom has put out there to date. Given that this version of Mutant Year Zero will house characters only made by the dev team, it would make sense to see our options leading up to launch. We have not, but at least we have a look at one new character in the mix just before we download and start playing the game.

Here we go with Farrow, a fox-looking mutant who also has the special ability of being a stealth assassin. Something we could have used in all of those early plays of Mutant Year Zero as stealth has seemed the answer but the core three we have had were not always the best at it. It was always a brute force kind of feel with a few ranged/stealth options. As you will see in here announcement trailer here, it looks like Farrow will be the option some of us have been hoping for since Mutant Year Zero was first announced in its video game form. Why it took so long to get here is beyond me. I am just glad we have Farror to look at and use in the full game. At least once we are able to recruit her to the team.

Farrow is one of the recruitable characters you will encounter during your expeditions in The Zone. When you find her, you may notice that she is not quite from around here. Her true origins are a mystery — even to her. All she knows is her name is Farrow and she is a product of the Zone. Specializing in stealth and assassination, Farrow comes equipped with skills and gear that make her adept at quickly and quietly dispatching her foes. Her signature ability, Silent Assassin, makes her particularly valuable for initiating combat out of stealth, such as when picking off stragglers.

How are you feeling about Farror here for Mutant Year Zero: Road To Eden? Is this the character class you were looking for or did you think that Dux was going to be the stealth option with the sniper rifle? Do you think the other mutants we will have on our team will fill other roles or will they be different options for what we have already now? Let us all know down in the comments and then feel free to discuss. If there is more to share for Mutant Year Zero: Road To Eden, you know we will share it here. All you need to do is be sure that you are sticking close to the site to see and hear all of that.