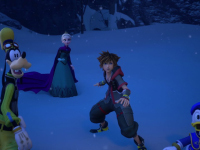 Here we go with some great news for Kingdom Hearts III as it looks like the game has wrapped development and poised to hit that January 29th release date for the PS4 and Xbox One. It did not seem like it was going to be a huge issue for Square Enix to hit the mark, but it is now confirmed and we can set the date in stone for ourselves now. That is unless there is some reason they find to push out the date for Kingdom Hearts III a bit longer. I highly doubt that would be the case given how long we have all been waiting, but it is always something we can worry about. For now, though, we can look to the date to be solid now.

To go along with that announcement, we have an extended trailer to look at for Kingdom Hearts III to show off what we can expect in the game. You may have seen a shorter version of it already in theaters, but here we go where we get to see all of those new and a few old worlds we will be fighting our way through. I am sure that there are going to be a lot more mixed in, there really has to be, but this is what we have to look at here. Mostly they are the Pixar films here in the Kingdom Hearts universe, but we get to see a few others. Have a look at it all below and get ready for a little more of a wait until we will get to play it all and actually see all of the worlds live.

Kingdom Hearts III takes players on the adventure of a lifetime through a vast array of worlds. From Walt Disney Animation Studios’ Big Hero 6 and Frozen to Pixar’s Toy Story and Monsters, Inc., each world brings with it magical moments, unique gameplay experiences and classic characters new and old.

Did you have any doubt that Kingdom Hearts III was going to miss its mark or did you assume it was right on track given how long it took to announce the release date? Are you curious about why they are focusing on most of the Pixar worlds in the game and not the other Disney classics? What worlds are you hoping to see come back here that have yet to be shown off? Let us all know down in the comments and then feel free to discuss. When there is more to share for Kingdom Hearts III, we will share it all here. Just be sure to keep coming back to check for all of that in short order now.