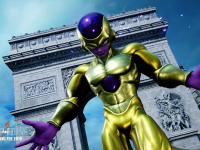 Get ready for some more of the ultimate forms to show up in Jump Force here as it looks like we are getting to see them here fresh out of the X018 Showcase. Well, for those characters in the game from the Dragon Ball universe. Bandai Namco has had the team place in the Blue and Gold forms of the characters, as they fit, and we can see it just below. I have no clue if these will be the final forms in Jump Force, but it is what it is for now. We all should know how anime goes here and I half expect to see even more along the way even if they do not fully fit the various franchises.

What is interesting here is that it does not look like there is much more in way of abilities and powers for the characters in Jump Force and it all looks more cosmetic more than anything. It also begs the question of how these characters are not "over powered" when it comes to other characters that will show up in the game but not be playable. I am looking at those Death Note characters we have seen teased for Jump Force already. Maybe it is just me and how I am thinking when it comes to this. I am not a huge anime freak though so…

Frieza, not one to be left behind by his long-time rivals, will also be able to transform into his ultimate form — Golden Frieza, bringing chaos and destruction to our world.

The roster for Jump Force continues to expand, with 24 playable characters already confirmed from 10 of the most well-loved Shonen Jump manga titles, which includes:

What are your thoughts on these new forms coming to Jump Force and will they bring more than cosmetic touches with them? Will other characters get forms like this or will these be the ones who are over powered in the game forever? What other characters are you still hoping will make the jump over into the game that have not been teased so far? Let us all know down in the comments and then feel free to discuss. For more on Jump Force, be sure to keep checking in here. We will keep all of the updates flowing at you as best that we can.