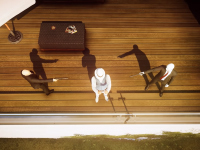 From what we have been shown and told so far from IO Interactive and Warner Bros., Hitman 2 is shaping up to be the height of perfection for the franchise to date. A lofty claim to make given where gaming is at the moment but it is most likely part of the hype train to get us all pre-ordering before November 13th. It could also be the fact that the team has put in a lot of work and added in some new features to give us all that perfect murder sim we have been waiting for. Nonetheless, it is the claim we have to examine here for Hitman 2 in the latest trailer for the game. A good portion of these new additions are shown off here after all.

While the video will do a great job of showing and reminding, Hitman 2 will be getting a co-op mode and a 1v1 online competition mode so it will not be just a solo run every time. We are seeing six new locations added in with the previous locations getting updated and upgraded to fit the new system we will be playing in. Also, as we mentioned last week, the briefcase will be back for Hitman 2 and will also bring in some new features for us to play around with in the game. It does sound like they are getting close to the perfect version of the game. I just will not claim it as that generally means that there is nowhere else to go with it and we will not see more.

Players can also enjoy franchise-first multiplayer modes in the form of Ghost Mode, IO Interactive’s unique take on 1-versus-1 online competition, and Sniper Assassin, a standalone mode that brings a cooperative experience to the Hitman series for the first time, allowing two players to work together online to take down their targets. Additionally, Hitman 2 will incorporate a variety of different upgrades and enhancements, including smarter combat A.I., a brand-new mini-map, security camera grids, picture-in-picture replays, an abundance of new tools, strategic use of mirrors, the ability to hide in crowds and foliage, the return of the fan-favorite briefcase and much more!

All of these new features will be included in Hitman 2 at launch on November 13th, and the ever-expanding world of assassination will continue to grow with a consistent flow of post-launch live content via Elusive Targets, Escalations, Challenge Packs, Contracts, and more. The first of numerous free live content updates will include the upcoming Elusive Target mission starring international actor Sean Bean, who will take on the role of Mark Faba, a former MI5 agent turned freelance assassin who is notoriously known as “The Undying” due to his reputation as a master of faking his own death. Elusive Target No. 1 Starring Sean Bean, entitled The Undying, will release on November 20th, one week after Hitman 2 launches on November 13th, and will run for a limited time. These missions are free for all players, allowing one chance to assassinate the target and if not successfully completed, the contract cannot be retried.

If that was all a repeat for you and you want more Hitman 2 to take in, we also scrounged up a new video run of the Miami mission in the game. A challenging version of it as the player attempts to kill both targets and get out in under twenty minutes. It is not the best of runs, but it does show off how well we can improvise and quickly find things to use in Hitman 2 to further our goals. Have a look down below and see what you may have tried different along the way. Then get ready to do so when the game launches on November 13th.

Do you truly think this will be the perfect Hitman title or is it all just marketing at this point? Would you want it to be the perfect version leaving no room for change along the way? How would you have gone through the Miami map differently to kill both targets, get out alive, and in the time limit set down? Let us all know down in the comments and then feel free to discuss. For more on Hitman 2, just be sure to stick close to the site here. We will keep it all coming at you as fast as we can.