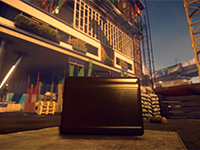 It may seem like it was a no-brainer but Hitman 2 will be bringing the briefcase back into the mix. Not only that, but IO Interactive is offering a few more ways to use it in the game besides just dropping hardware out in the map for 47's use. That is still an option Hitman 2, of course, it just comes with a whole lot of other uses that a briefcase can be used for in the game. Things like distractions, having others smuggle items into locations for you, and beating someone into unconsciousness to leave a crime scene unnoticed. You know, normal briefcase things that we can expect.

There are a few other things to go along with that and you can see them in action down in the video we have for this announcement. I am sure that we will find other uses in Hitman 2 for the briefcase here, gamers always do, we just get to see some of them here and then hope for the best. Have a look and get ready to use it to its full advantage as we get closer to the November 13th release date.

The latest installment in the How to Hitman video series, entitled The Briefcase, was released today. Due to popular demand, the fan-favorite briefcase will make a triumphant return in Hitman 2, allowing Agent 47 to conceal a wide range of items beyond a sniper rifle. The new and improved briefcase can now be utilized to render opposition unconscious through blunt force, distract potential eyewitnesses, and through clever manipulation, it can be used to have oblivious adversaries import highly volatile or sensitive items into otherwise guarded areas.

Warner Bros. Interactive Entertainment and IO Interactive today also released the first in-game screenshots of actor Sean Bean’s upcoming Elusive Target character in Hitman 2. Bean will take on the role of Mark Faba, a former MI5 agent turned freelance assassin who is notoriously known as “The Undying” due to his reputation as a master of faking his own death. The first Elusive Target mission, entitled The Undying, is scheduled to release on 20th November, one week after Hitman 2 launches on 13th November, and will run for a limited time.

If that was not enough Hitman 2 for you, we also have our first look at Sean Bean's character in the game as the first elusive target. You may remember this from a previous update we had with all live-action footage of the actor and nothing in game. Here we have two new screenshots of his character we will be taking down. It is nothing to write home about, unless your family is huge Sean Bean fans, but it is something to see for Hitman 2. He still is not hitting the game until November 20th as the first target, as a reminder, you can just see how he will look a little in advance. How are you feeling about Hitman 2 bringing the extra features to the briefcase here? Is it all something that you think should have been mixed in before or is it something will bog down the game for you? What do you think about how Sean Bean looks in the game here and will you be aiming for him right out the gate? Let us all know down in the comments and then discuss. For more on Hitman 2, be sure to keep coming back here. There is still some time to get more for the game and we will keep it all coming at you here.