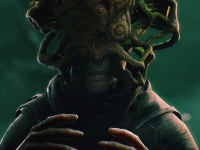 Do not expect to see or hear about any delays for Call Of Cthulhu now as it looks like this new title from Cyanide Studios has been set to gold. That is, the game has gone gold and is in the final stages to make sure we all get our copies on October 30th. So, I guess there still could be a delay if the manufacturer of the physical copies of Call Of Cthulhu causes an issue, but that just means you can aim to pick it up on the PS4, Xbox One, and PC through digital means if that is the case and you need some hot Cthulhu loving right away. I doubt that will ever be the case, but it is always good to know you have options.

As is customary for announcements like this, we have a new trailer to look at for Call Of Cthulhu. It does not offer up much in the way of new footage or details about the game, but it gives us another look at how the audio and visuals of the game will work toward the goal of driving us insane. That and you can read snippets of what others are already saying about Call Of Cthulhu based on a preview build they had a chance to play with. Nothing in terms of a final review, but it is what it is to get you to secure your copy now. Thankfully, we will have our review up as soon as we can to give you a true gaging of it all and not just the flashy parts.

Call Of Cthulhu — Preview To Madness

With Call Of Cthulhu releasing in under two weeks, members of the press have already gotten their hands on the early hours of Detective Pierce’s haunting investigation. Today’s trailer explores praise for the game’s distinctly Lovecraftian atmosphere, mesmerizing audio and visual design, as well as the RPG-investigation mechanics that allow players to discover clues, draw conclusions, question locals, and survive the island’s cosmic horrors.

In Call Of Cthulhu, nothing is as it seems. Terrible creatures, conspiracies, and cults await on Darkwater Island, lining the path to the horrifying truth behind the island. Pierce’s mind will suffer — solving the case will bring him to the brink of insanity, to a place where death may appear the most favorable outcome. The player’s senses will be challenged to the point of questioning whether everything and everyone is real or illusory. Creeping shadows hide lurking figures… and all the while, the Great Dreamer prepares for his awakening.

How are you feeling about Call Of Cthulhu now that you know it is set to release without much to worry about delays? Do you like where the team is going with the theme and mood of the game or should they have gone darker? Will you be picking the game up digitally or will you go for the physical form instead? Let us and the world know what you are thinking down in the comments and then feel free to discuss. For more Call Of Cthulhu, be sure to stick close to the site here. We will keep it all coming at you as best and fast as we can.