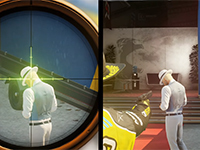 For those who have been looking for other ways to play Hitman 2 in a multiplayer kind of way, and more than leaderboards, then you are in for a solid treat here. We now have word from IO Interactive that we will be getting something called Ghost Mode in the game and will actually be something where players can play against each other in the game. Yep, we are getting multiplayer in our Hitman 2 now but at least, in this case, it sounds like something that makes sense and can be quite a bit of fun. That and all with the core game when it launches on November 13th for the PS4, Xbox One, and PC. You cannot truly scoff at that just yet.

In this Ghost Mode for Hitman 2, we will be pitted against another player in the same map, with the same starting time, and no gear at the start. We will then see a list of targets on the screen that we will need to take out and will share the same space for both players. That is, each will have the same target and will need to rush to take them and four others out before their opponent. The target looks to be the only thing that shares the same space as one player's actions do not affect the other's. They can cause all the chaos they want and it will not slow your pace. But if they do get a kill, you will have a time limit to take out another for some reason. The only thing that does not make sense for this aspect of Hitman 2 here.

Ghost Mode in Hitman 2, gives players the chance to simultaneously hunt targets while in the same location and can see a “ghost” version of their rival gamer to track progress against their own, but they exist in separate realities unaffected by the actions of their adversary. In Ghost Mode, the player who can outsmart, outplay and outkill their opponent by eliminating five targets first, will declare victory.

What do you think about this new mode for Hitman 2 here and it is something you have been waiting for? Do you think it would play better if both players share the same space and could cause issues back and forth or is this how they are keeping trolling to a minimum? What are your thoughts on the time given after a kill has occurred? Let us all know down in the comments and then feel free to discuss. For more on Hitman 2, be sure to keep checking in here. We will keep it all coming at you as best and fast as possible.