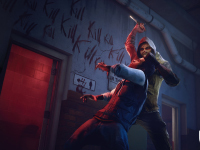 A new trailer for Last Year: The Nightmare is here to show us how the game has progressed and when we may be able to see this version of Last Year drop

Talk about a title that felt like it fell off the map, but Last Year: The Nightmare is back and it looks like we will see it launching soon on Discord. Do you remember this title? It has been almost two years since we last heard some substantial information here from Elastic Games on it all. Originally it was just named Last Year and fell into the same vein as a bunch of other titles at the time. It is a six-player game where five players take on stereotypical roles from horror franchises and the other plays a killer running around trying to end them all. Maybe now you are remembering it and how it was pushed aside for other titles at the time that do not show signs of getting many updates soon.

In any instance, you now have the basics for Last Year: The Nightmare and can be on the lookout for it to join your list of PC games sometime this Fall. That is at least the current timeline laid out and backed up in the following trailer for the game. Something that shows off those five different teenagers trying to survive and bring down one of three playable killers in the game. Killers that can set up traps, invisibly stalk you, and then hit you with a major jump scare when you least expect it. One of the things I was excited to hear about for Last Year back when it did not have the extra subtitle. Have a look down below to be reacquainted with this amazing looking horror game.

Halloween night. 1996. A group of teenagers awake to find themselves trapped in a dark, twisted reflection of their sleepy hometown of Forest Hills. As they make their way across the East Side High School campus, they realize they are being hunted by a supernatural force taking the forms of fearsome killers. Relentlessly pursued, the teens must band together to fight back, survive, and escape the terrifying anomaly they have come to know as The Nightmare.

What do you think about Last Year: The Nightmare now that we have a bit more to go on here? Do you think it will have a better lifecycle than the other many versus one titles we have seen come and go or limp on? Do you like what you can see and hear about the Predator mode for the killers or do you think it could make things a little unbalanced? Let us all know what is on that brain of yours down in the comments and then feel free to discuss. For more on Last Year: The Nightmare, keep a wide eye open here. We will bring you all that we can with, hopefully, a solid release date soon.