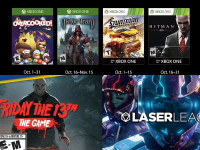 A new month is almost on us here with October and that means new video games that we are going to get for free. Well, video games that you will get for free if you are part of the PlayStation Plus or Xbox Gold services. If you are then you may be in for a treat as the list of titles going live starting next month is here and we have it for you. Again, we get to expand out titles on the Xbox One and PS4 without needing to make any extra spends at our local stores.

It seems like there is a lack of horror video games here for October, but still some solid additions to all of these services we are paying for anyways. I am sure there were a lot of you who missed out on the gem of a game in Friday The 13th: The Game and that one falls into the horror genre. Even though it is a multiplayer one, that is not to say there are not some great scares and matches to have. You can also get ready for the next Hitman game with Hitman: Blood Money. It is one of the better-touted video games in that franchise so it may be a worth of going back and re-exploring all that has to offer.

Here is the list of games we will all get for our PlayStation systems starting on October 2nd of 2018.

Here is the list of games we will all get for our Xbox systems starting on October 1st of 2018.