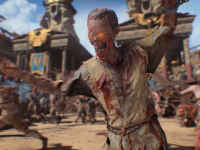 New footage for one of Call Of Duty: Black Ops 4 Zombies’ experiences has crawled up featuring more from a Call Of Duty franchise musical veteran

When I first saw that the new Call Of Duty: Black Ops 4 Zombies mode was going to be messing around with time, I was a little concerned. I understood what Treyarch was aiming for, but I was not completely certain that it could work out as well given that it was many different eras and not just one new one as we have seen in the past. Now we jump forward to today as Activision has pumped out a new trailer for the Call Of Duty mode, and I think I am a bit more sold on it. At least as it goes for the IX experience that we have seen many times already. That would be the gladiator pit looking area where we will still have our firearms but will still need to fight like a Roman for some reason.

As you will most likely see below, there is a lot more going on in this Call Of Duty Zombies when it comes to the horrors we will need to put down. There are huge brutes that are rocking bladed gauntlets, giant ax-wielding zombies, and zombies that explode out of other zombies for some reason. All in a very cinematic style. At least in this trailer, as this is not how I have remembered the Zombies mode in past Call Of Duty games. I may have only been playing them in specific ways though so I may have missed out. If they set the whole thing to an Avenged Sevenfold song as we see here though, it will not truly matter. As long as I can pull off some of those shots.

On October 12, Call Of Duty: Black Ops 4 will deliver the largest Zombies offering ever on disc, which includes one of three experiences, including IX. Bringing a new cast of characters to a new storyline, IX is punctuated by “Mad Hatter,” a song written by multi-platinum recording artists, Avenged Sevenfold.

How are you feeling about this new look at the Zombies mode for Call Of Duty: Black Ops 4? Do you think it will deviate as much as the video here kind of depicts or is this all for show and we will still have the same mode just with differently skinned zombies running around? What is your go to music to play in the background while playing Zombies mode in the past titles? Let us all know what you are thinking and more down in the comments. As we have more for Call Of Duty: Black Ops 4 and its Zombies mode, we will share it here. There has to be a lot more to build up to the impending release that is now under a month out…