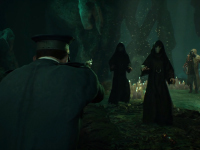 If you have been hoping for new gameplay for Call Of Cthulhu, then we are here to offer it up. It is also not the same rehashing of the same footage but actually some new gameplay that Cyanide Studios put together to show off some of the true horrors that the game will house. At least as true horror in terms of the elder gods that we can get in video game form. I mean, it does look like they are playing well with the sanity portion of Call Of Cthulhu, but there is no real way to get that point across without forcing the human to truly go mad. Maybe we can get Focus Home Interactive to greenlight a VR version of the game too so we can get one step closer to that. Doubtful, but we can hope to see something before October 30th when the game hits the PS4, Xbox One, and PC.

As I mentioned, the new footage we have here for Call Of Cthulhu does look a bit more at how we will be navigating the horrors and monsters of the world we will inhabit. As this is not a shooter or combat specific game, we will need to figure out other ways around sometimes. All highlighted here a bit more in terms of dialog options and stealth that we will need to use to make sure Pierce does not get eaten or ripped to shreds by some eldritch horror. There is no word on how often this will occur in Call Of Cthulhu, but I do hope that it is balanced out extremely well. I do not see this being a stealth specific game, but I understand that we should see some of it as there is no way a mere mortal will be able to take on some of the creatures.

Call Of Cthulhu, the official video game adaptation of Chaosium’s tabletop RPG, will release October 30 on PlayStation 4, Xbox One, and PC. Today, we invite players to tread further down the path of madness in this new Gameplay Trailer, as the Darkwater investigation begins to spiral out of control in the midst of unsettling conspiracies, bizarre cults, and even the Old Ones themselves.

In Private Investigator Edward Pierce's quest to unveil the truth, players will need to rely on a variety of upgradeable Skills to escape the clutches of madness and death. The Spot Hidden and Investigation skill paths let players uncover more clues and draw more meaningful conclusions, unlocking more topics to question in dialogues. Convincing the distrustful locals of Darkwater to reveal what they know will require proficiency in Eloquence and Psychology. Pierce's Strength skill may also come in handy for when brute force is necessary, or to intimidate impressionable people into offering whatever they’re hiding. Expertise in Medicine and Occultism, improved only through discovering unique books and artifacts throughout the investigation, may grant additional insight – but knowledge can be a curse in Call Of Cthulhu. The more aware Pierce is made of the horrors that dwell beyond the fabrics of reality, the more he will fall to insanity, impeding his ability to draw logical conclusions.

Pierce is but a mortal man, with few allies in a remote, unfriendly environment. Whether outnumbered by mortal adversaries or facing foes whose mere existence is beyond human comprehension, offering physical resistance is usually not an option. Making the most of Pierce’s extensive set of skills, along with subterfuge and stealth, is paramount… though escaping the gaze of the Great Dreamer may ultimately prove futile.

It does look like the sanity feature in Call Of Cthulhu may have taken a bit of a turn since I last saw it in a demo a year or two ago. In the video here it states that Pierce has a fear of the dark and small spaces. In past demos, this was something that only came about as his sanity slipped. It was also shown that it was not a set thing in Call Of Cthulhu either but now it looks to be something to force elements of the game. That is at least how it all sounds here. Maybe it will be back to something we heard of from before when the final game comes, but we will have to wait and see.

Are you fully ready for Call Of Cthulhu to hit us or do you need some more time to build up the courage? Do you think that the sanity issues mentioned before will be back in the game or have they been removed as the video alludes to here? Do you think that we will have the option to go "crazy" on some horrible monsters or will we always have to go stealth during those portions? Let us know what you are thinking about all of this down in the comments. If there is more to share for Call Of Cthulhu, we will share it all here. Be sure to keep checking back in to see and hear all of that in due time.