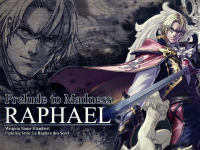 Time to add one more to the roster of SoulCalibur VI as it looks like Raphael is back in the mix here and bringing that fencing style we all knew from the past. Yes, this is yet another old character that Bandai Namco is tapping for us to join in the fight, but it does further expand out the roster so we cannot truly complain. I mean, we could but seeing as SoulCalibur VI is only a month out from launch at this point I do not think it is going to do all too much. There could be a lot of work tossed in to change things up before October 19th or they could just rely on you downloading the newer and other characters after launch. That is if there are more to truly come.

In any instance, here we have Raphael for SoulCalibur VI. Just as flamboyant and fluid as one would expect a fencer to be. Some of the moves we see here do not feel to truly go with Raphael's style, but I can see them in there to flesh things out and make sure we have a well-rounded character instead of one that should be walked all over when compared to the other forms in the game. I am not saying a fencer would normally get trounced in a fight, but in the realm of SoulCalibur VI and all of the other forms there, it would be hard to see a true fencer handle themselves just as well. You know, video game logic and such.

"Let's dance!" Raphael the master of fencing returns in SoulCalibur VI! He brings his agile swordsmanship back to the Stage of History!

Was Raphael the character you have been dying to see come back for SoulCalibur VI or was it a shock for you? How well do you think a true fencer would hold up in the fights that the game would put on with the varying other styles? What other characters do you think we will get to see before the launch date or will it be more of the same that we have been getting here? Let us and the world know down in the comments and then feel free to discuss. For more on SoulCalibur VI and the growing roster, keep checking in here. We will keep all of those updates flowing out there as best that we can.