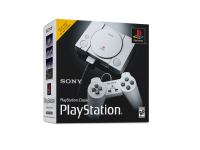 It was truly only a matter of time before we caught wind of a PlayStation Classic actually coming to market and it looks like today is that day. Not that it is coming to market, we will have to wait until December 3rd for that, but it has been announced and we can no look forward to playing all of those old titles from the PS1 days again. All on a console that is about 45% smaller than the original PlayStation and with two controllers. That is some of the basics that will be coming with the hardware as well as the usual HDMI and USB cables that will be needed to see and power the system. Just about the basics, we could expect.

The PlayStation Classic will also come loaded with twenty different titles with the only ones announced being Final Fantasy VII, Jumping Flash, Ridge Racer Type 4, Tekken 3, and Wild Arms. I am sure that since the pre-orders are open as of right now, we will see a full list and then see modders open it up to allow for a larger catalog of older titles. As if we did not have enough to play on our current PlayStations, we can add a whole mess of old games that look to have remakes coming or have been vastly improved over the years. At least we can pretend we are back in the 90s again with this thing.

Today, we are excited to announce that we are bringing back the original PlayStation experience in a new miniaturized version — PlayStation Classic! The console will come pre-loaded with 20 classic titles, including fan-favorites such as Final Fantasy VII, Jumping Flash, Ridge Racer Type 4, Tekken 3, and Wild Arms.

The mini console is approximately 45% smaller than the original PlayStation, and it emulates the original’s look and feel by featuring similar controllers and packaging. Long-time fans will appreciate the nostalgia that comes with rediscovering the games they know and love, while gamers who might be new to the platform can enjoy the groundbreaking PlayStation console experience that started it all. All of the pre-loaded games will be playable in their original format.

Available for pre-order at select retailers across the US and CAN, each unit will also come with an HDMI cable to connect to their TV, a USB cable, and two controllers for local multiplayer within compatible titles. PlayStation Classic will be available for $99.99 USD (MSRP) / $129.99 CAN (MSRP) on December 3, 2018 — a historic date for all of us at PlayStation.

I am a bit curious as to why Sony wen this way with the PlayStation Classic and not the various others they could have. Like, I do not know, make it just a basic application to download on your PS4 that will allow you to play these PS1 titles again. That and also allow for us to reuse those discs that we have been holding on to since childhood. That and also why they did not make the PlayStation Classic have the ability to be expanded through memory card updates. That way they could sell those who want in on this expansion cards that hold another set of games to expand out without the need of modding. Maybe that is just me. It is your $99 USD though, so you do you.

Are you excited to see that the PlayStation Classic is going to be a true thing know? Did you think that they would sit it out while almost all of the other consoles out there do the same thing now? What do you think or hope the other titles will be that will come pre-loaded on the system? Let us all know down in the comments and then feel free to discuss. For more on the PlayStation Classic, keep checking in here. We will keep all of those updates coming at you as best that we can.