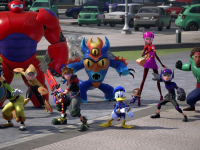 Last week we had a nice little look at Big Hero 6 coming to Kingdom Hearts III with a whole lot of other worlds mixed in. Now we are back with yet another TGS trailer from Square Enix for the game with more to take in. All about the same in terms of gameplay footage from the world in question for Kingdom Hearts III, but also a lot more for all of those other worlds we will be going to with Sora and friends. Or as they call it here, the Keyblade Hero 3. Something that does not roll off the tongue as well as the source material, but it is what it is for now. At least we have new gameplay to take in before January 29th when it hits the PS4 and Xbox One.

In addition to all of that, we also have a new look at how the Gummiphone will be used in Kingdom Hearts III. Just as one would guess, we will be able to take selfies in the game. There is no word if this is going to be part of some kind of larger photo mode, but it is a safe assumption as we will be able to at least take selfies in Kingdom Hearts III. I would rather have a full photo mode, as I can already see things I would like to screenshot better, but we will have to take what we have here. There is still so much time to give us all that we want, so it is time to just hold out for now.

Are you further excited for Kingdom Hearts III now that you had the full trailer that Square Enix was holding on to or will it still take more? What other questions do you have about the Big Hero 6 world based on what little more we have here? DO you think we will see a full photo mode in the game when it launches or will it stick with the basic selfie mode we see here? Let us all know down in the comments and then feel free to discuss. For more on Kingdom Hearts III as we get it, be sure to stick close to the site here. We will keep those updates coming at you as fast as we can and you will not want to miss out.