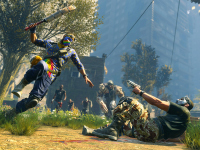 The early access for Dying Light: Bad Blood is underway and you can now join in the 12 player battles set in the Dying Light world

The Early Access you have been waiting for is finally here as Dying Light: Bad Blood has entered into that phase of its life and you can go pick it up now for Steam on your PC. Maybe not as you look off toward the next major addition the franchise from Techland. That does not stop the fact that you can now get in on this Battle Royale style mode for Dying Light as of you reading this and can also join in those twelve player battles where only one person can truly win. It is almost like we all know the drill by now. There is no stopping it though as it is there and ready for us to take on.

To get in on all of this you will need to pick up the Founder's Pack for Dying Light: Bad Blood that will not only give you the early access to the game but also a few little goodies to go along with your purchase. Three legendary skins, a legendary mask, 1000 blood bucks, and three legendary weapon skins as well. All for the low price of $19.99 USD, even though Dying Light: Bad Blood is slated to be a free-to-play game for the PC, PS4, and Xbox One when it fully comes to market. It is your money though. You do what you are going to do and get in early if you so desire. It has to be good for something in the grand scheme of things, right?

Get competitive and get the blood on your hands in the all-new brutal royale experience. Available now in Steam Early Access.

It’s all in, one out in Dying Light: Bad Blood — a fast-paced and gory online game that creatively blends PvP and PvE combat while retaining the core of Dying Light’s iconic gameplay.

Are you joining in on the Early Access for Dying Light: Bad Blood or will you wait until it is freely available for all? Does it seem like a great price to get to play early with a few cosmetic extras or is it missing the mark for you? Do you think that Techland will get the cross-platform play pushed through or will we still not be able to play with everyone when it fully releases? Let us and the world out there know what is on your mind for this. Then be sure to keep checking back in for more on Dying Light in general as we will keep all of those updates coming at you as best we can.