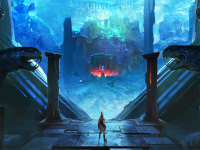 Assassin’s Creed Odyssey still has a few weeks to go before we all dive in and see how this one is furthering the franchise. It has been one of the settings I had been hoping for when Ubisoft started jumping around in time to further expand the world and story of the millennia. Now it looks like we have a solid look at how it will keep going on well after the initial launch as well as to why we are not getting another Assassin’s Creed next year. If the information we have for the Season Pass and post-launch content is anything to take it, and it is, it makes perfect sense as it will go well into next year before we are even done playing this story.

To kick things off here, we have a look at the Season Pass content coming for Assassin’s Creed Odyssey. The first to bits being full story expansions that will span over three ‘episodes’ each. The first slated to drop in December at some point and follow the story of the first hero to wield the hidden blade. After those three episodes go by, sometime in the Spring of 2019 we will see the second story arc for Assassin’s Creed Odyssey drop where we will head into the lost city of Atlantis to find out what happened to the city as well as face off with some mythical monsters from the setting. All over another three ‘episode’ setup. Not too shabby at all.

If that is not enough Assassin’s Creed for you, those who pick up the Season Pass will also have access to the remaster of Assassin’s Creed III so you can take a break and head to a different era if you so choose. Given that it will be hitting the respective stores in March of 2019, that will be a lot of Ancient Greece to take in and the American Revolution done up for the setting and brought to us with all the 4K resolution could be a welcome change to take in. It will also get us another step closer to having all the games on one platform of our choosing, so there is that too.

That is it for all of the paid DLC coming for Assassin’s Creed Odyssey, so what about the free content that is also coming for the gamer on a budget. First, it looks like the Discovery Tour is coming back so we can run around Ancient Greece without worry of harm so we can learn about the lands and history. There will also be other mini-stories told in between the larger DLC ones that will include elements from the core game to keep you all entertained and constantly playing. There also looks to be ongoing events in Assassin’s Creed Odyssey that will land you new and unique gear to use in New Game+. It does not look like we will be facing off with any of the gods like we had before, sadly. The Season Pass is included in the Assassin’s Creed Odyssey Gold, Ultimate, Spartan, and Pantheon Editions, and is also available for purchase separately.

In addition, an extensive lineup of free content, including new narrative content and in-game events, will be available for all players after launch, including:

What are your thoughts on all of this DLC for Assassin’s Creed Odyssey and do you like the release model? Do you think it will keep fans of the franchise playing until 2020 when the next major addition to the franchise will come out from Ubisoft? Do you think that the free story missions will be more than fetch quests or will it just be something to distract us until the next large release? Let us all know down in the comments what is on your mind and then feel free to discuss. For more Assassin’s Creed Odyssey news and updates, keep your browser tuned in here. We will keep all of them coming at you as fast as we can.