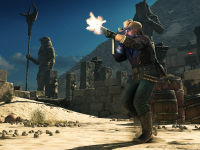 The launch day for Strange Brigade has come and gone, but that does not mean that we have just been left to fend for ourselves and find reason to keep coming back to the game over and over. We all knew that Rebellion was bringing us a whole Season Pass worth of extras to the game and now we know about when this will all happen. One new bit has already hit Strange Brigade as part of this DLC and then we have had another in terms of a free update for the game. It is always nice to see more breathe given to a game so quickly post-launch when so many have most likely not made it fully through the whole core of the game. Just the way it should be.

If you are already a Season Pass holder for Strange Brigade, then you may have already seen that the Texas Cowboy Character Pack has been added to your experience there. It brings with it a new character and an amulet power to use as we see fit in the game. If you are not a Season Pass holder for Strange Brigade, you were not left out as there have been multiple Score Attack Maps and a Horde Map added in just for being able to download it all on September 11th. Not too shabby for those who opted to give Strange Brigade a chance in the first place. But wait; there is more…

For those still on the fence or just wondering when the rest of Strange Brigade’s Season Pass of content will land, you are also in luck. We now have a roadmap of sorts to point us in that direction so we know when the other three characters for the game will come with their weapons and amulet powers for us to use. Not only that, but we also now can see when all of the other free bits of DLC will land for those gamers on a budget. It looks like we will have two more drops for Strange Brigade in October with the final one coming in November at some point. Rebellion has not set down specific dates as of yet, but given the turnaround on the first DLC, I have a feeling we will see that really soon.

Season Pass owners can now play as Patrick ‘Bash’ Conaghan, the ex-rodeo rider with an eye for danger and pots of gold! Bash and his ‘shocking’ Wrath of Quetzalcoatl amulet attack are also available separately in the Texas Cowboy Character Pack for $6.99 and available on PS4, Xbox One, and PC.

All adventurers can try their luck in additional Harbin’s Dig Path, Hidden Valley and Tunnels of Wadjet Score Attack levels, and the brand-spanking new Palace map for Horde Mode — all free and available now!

Check out the full DLC roadmap below:

Campaign Mission — The Thrice Damned 1: Isle of the Dead

Have you had the pleasure of enjoying Strange Brigade as of yet or is it a title you have been questioning for a while now? Are you glad to see that the Season Pass of content is flowing out there rather quickly or do you think it should be spaced out a bit more than a few weeks? Will you be sticking with only the free updates that will be coming or has this sold you on dropping the extra cash for the extra goodies? Let us and the world out there know what you are thinking down in the comments. For more on this and Strange Brigade in general, be sure to keep checking in here. We will keep all of our coverage coming at you as fast as we can.