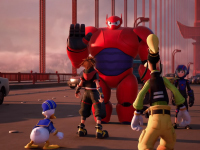 This is not the first we have heard about Big Hero 6 joining in on the fun of Kingdom Hearts III. We heard about it a while back when Square Enix did their thing at E3 this year, but we have not truly seen or heard more than that until now with the latest from TGS. We now have a new look at this new world in the Kingdom Hearts universe and how we will be interacting with the world and its characters. At least in a little bit more than we have had before. We will have to wait until January 29th to see it completely. I just know I will take everything that I can until then, so it is time to sit back and enjoy.

Word to the unwise here, there is only a very small taste here for their version of San Francisco in Kingdom Hearts III as we get a little more in the other worlds we have seen so far, but at least we know that others besides Baymax and Hiro will be showing up in the game and that we will have a wide array of Gummi Ships in the game. We definitely get more than that in this new trailer here. This leads me to think that Big Hero 6 may play a larger role in the grander scheme of Kingdom Hearts III so they are keeping things hidden for a bit longer. I could be wrong though.

If that did not scratch that Kingdom Hearts itch though, we also have word that we will be able to experience more for the franchise before this title officially launches. At least if you have a PS4 and a PSVR set up as we have a new Kingdom Hearts: VR Experience coming this holiday season to hold us over until the new year. It will let us go through some of the more iconic events and scenes in a 10-minute interactive setting. It is a free thing we will be able to download, so we cannot truly complain about it. Have a look at what it could hold just below and then let that help you figure out if you are going the VR path soon?

Square Enix and Disney have announced Kingdom Hearts: VR Experience for PlayStation VR! Kingdom Hearts fans can relive some of their favorite memories from the storied franchise with this special, immersive experience. This holiday, gather your friends and family to enjoy a free 10-minute interactive video featuring the series’ iconic, breathtaking music. While we won’t spoil exactly what you’ll experience, we can confirm that you will also be able to unlock new content as you keep playing!

Kingdom Hearts: VR Experience will be available this holiday as a free download from PlayStation Store.

What do you think about what we have here for Big Hero 6 and Kingdom Hearts III? Could there have been more shown or do you think it will play in the grander scheme and this world could spoil some of the bigger plot along the way? Will you be looking forward to the new VR Experience announced or will it be something you miss out on given the specifics for it? Let us and the world know what you are thinking down in the comments. As we find out more for Kingdom Hearts III, we will update you here. Just stick close to the site so you are able to get all of those updates.